Durham is a town in Strafford County, New Hampshire, United States. The population was 14,638 at the 2010 census. Durham is home to the University of New Hampshire.

The primary settlement in the town, where 10,345 people resided at the 2010 census, is defined by the U.S. Census Bureau as the Durham census-designated place (CDP) and includes the densely populated portion of the town centered on the intersection of New Hampshire Route 108 and Main Street and including the university which dominates the town. 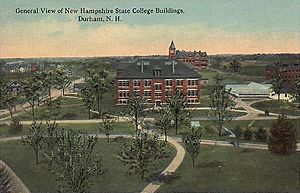 At the time, the land that is now New Hampshire belonged to Massachusetts; not until 1692 did the New Hampshire colony finally gain full and permanent independence from its southern neighbor. Most of the coastal area was divided among four townships, and for its first century, Durham was part of Dover. The village location was ideal for its fresh water, natural meadows for livestock, and the transportation opportunities afforded by the waterways leading to the Atlantic Ocean. The land along the river was quickly settled, and nearby dense forests provided the timber necessary to construct homes as well as boats. Oyster River Plantation took the form of a small agricultural village, and the first generation of residents worked to clear and shape the land for planting.

The town name "Durham" was suggested by the Rev. Hugh Adams, as claimed by him in an address to the General Assembly in 1738. Two of the earliest settlers of Dover were William and Edward Hilton, the direct descendants of Sir William de Hilton, Lord of Hilton Castle in County Durham, England, but there is nothing to prove that Durham was named in their honor.

During King William's War, on July 18, 1694, the English settlement was attacked in the Raid on Oyster River by French career soldier Claude-Sébastien de Villieu with about 250 Abenaki from Norridgewock under command of their sagamore Bomazeen (or Bomoseen). In all, 104 inhabitants were killed and 27 taken captive, with half the dwellings, including the garrisons, pillaged and burned to the ground.

The community would rebuild, however, and by 1716 Durham was a separate parish. Because of its arable land, the town would develop as a farming community.

Benjamin Thompson, a descendant of an early settler, bequeathed his assets and family estate, Warner Farm, to the state for the establishment of an agricultural college.

Over the years the people of Durham have created several libraries:

Durham Social Library (1815-1857): This library was incorporated by act of the New Hampshire Legislature in 1815. The library contained several hundred books and had a membership numbering nearly 50.

Durham Social Library (1881-1892): Organized March 9, 1881, the library had a membership of 80 and several hundred books. In 1883 the Richardson house was purchased to house the library. It eventually merged with the Durham Public Library.

Durham Public Library (1892-1906): Established in 1892 through the provisions of a New Hampshire state act, this was the town's first "public" library. It contained more than 3,500 books and eventually merged with the library of the New Hampshire College of Agriculture and the Mechanic Arts.

Library of the New Hampshire College of Agriculture and the Mechanic Arts (1893- ): Came to Durham with the arrival of the College in 1893. Initially, the College housed the library in a single room in Thompson Hall. In 1900 Hamilton Smith gave the University $10,000 to construct a library, another $20,000 was obtained from Andrew Carnegie. In 1907 – a year after the town and the college agreed to merge their collective library resources – the building (Hamilton Smith Hall) was completed.

In March 1997 by a margin of 2-1, Durham voters passed a charter amendment to establish a Board of Trustees and allow plans for a new library to go forward. In July 1997 a temporary space was found for the new Public Library in a storefront between the dollar store and a pizzeria. Under the guidance of the Trustees and a newly formed Friends of the Library group, many volunteer townspeople come forward to sheetrock, paint, assemble shelves, and unpack and shelve 719 boxes of books. On July 21, 1997 a dedication ceremony was held for the new library, with Governor Jeanne Shaheen as the keynote speaker. It was the first new public library to be established in New Hampshire in almost a century. In July 2013 a new public library building was completed on Madbury Road.

A police force of some manner has served Durham since at least 1848. Durham Police Department is made up of 20 full-time and part-time officers and provides service 24-hours a day.

The Police Department's Adopt-A-Cop program was instituted in 1999 to improve relationships between University of New Hampshire fraternities. Each fraternity is assigned a police officer who attends house meetings and events and acts a liaison between the fraternity and the community.

The first fire department organization in Durham was organized in 1927 and the first salaried firefighter was employed in 1934.

The Durham Fire Department is one of the few fire departments in the country that is funded by both a municipality and a university.

In addition, McGregor Memorial EMS is a regional, non-profit organization delivering emergency medical services and education to the New Hampshire Seacoast area since 1968. 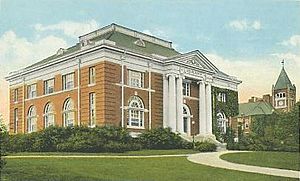 There were 2,882 households out of which 28.3% had children under the age of 18 living with them, 48.3% were married couples living together, 4.8% have a woman whose husband does not live with her, and 45.1% were non-families. 20.2% of all households were made up of individuals and 6.6% had someone living alone who was 65 years of age or older. The average household size was 2.79 and the average family size was 3.03.

There were 1,703 households out of which 20.9% had children under the age of 18 living with them, 37.2% were married couples living together, 4.2% have a woman whose husband does not live with her, and 57.3% were non-families. 25.2% of all households were made up of individuals and 8.8% had someone living alone who was 65 years of age or older. The average household size was 2.59 and the average family size was 2.91.

All content from Kiddle encyclopedia articles (including the article images and facts) can be freely used under Attribution-ShareAlike license, unless stated otherwise. Cite this article:
Durham, New Hampshire Facts for Kids. Kiddle Encyclopedia.