Hanover is a town located along the Connecticut River in Grafton County, New Hampshire, United States. As of the 2020 census, its population was 11,870. The town is home to Dartmouth College, the US Army Corps of Engineers Cold Regions Research and Engineering Laboratory, and Hanover High School. The Appalachian Trail crosses the town, connecting with a number of trails and nature preserves.

Most of the population resides in the Hanover census-designated place (CDP) — the main village of the town. Located at the junctions of New Hampshire routes 10, 10A, and 120, the Hanover CDP recorded a population of 9,078 people at the 2020 census. The town also contains the smaller villages of Etna and Hanover Center.

Hanover was chartered by Governor Benning Wentworth on July 4, 1761, and in 1765–1766 its first European inhabitants arrived, the majority from Connecticut. Although the surface is uneven, the town developed into an agricultural community. Dartmouth College was established in 1769 beside the Common at a village called the Plain—an extensive and level tract of land a mile (1.6 kilometers) from the Connecticut River, and about 150 feet (46 meters) above it.

At one point in its history, the southwest corner of Hanover was known as Dresden, which in the 1780s joined other disgruntled New Hampshire towns along the Connecticut River that briefly defected to what was then the independent Republic of Vermont. For a time, Dresden was capital of the republic. After various political posturings, however, the towns returned to New Hampshire at the heated insistence of George Washington. One remnant of this era is that the name Dresden is still used in the Dresden School District, an interstate school district serving both Hanover and Norwich, Vermont—the first and one of the few inter-state school districts in the nation.

"Hannover" (as it was spelled in the 1761 charter) was named either after a local parish in Sprague, Connecticut, or after the House of Hanover in honor of the reigning British king, George III.

While it is likely that the name "Dresden" derived from Dresden in Germany, it has also been suggested that it could derive directly from the old Sorbian word drezg ("forest") or Drezd'ane, for an inhabitant of a forest.

Hanover borders the towns of Lyme, Canaan, and Enfield, New Hampshire; Norwich, Vermont; and the city of Lebanon, New Hampshire. Inside the limits of Hanover are the small rural villages of Etna and Hanover Center.

The highest point in Hanover is the north peak of Moose Mountain, at 2,313 feet (705 m) above sea level. Hanover lies fully within the Connecticut River watershed.

There are a number of trails and nature preserves in Hanover, and the majority of these trails are suitable for snowshoes and cross-country skis. The Velvet Rocks Trail, located on the Appalachian Trail, has a number of rock climbing and bouldering spots. 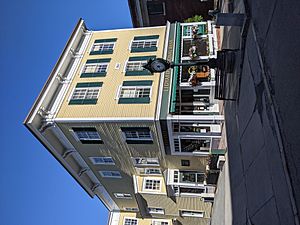 Hypertherm, White Mountains Insurance Group, and Daat Research Corp. are based in Hanover. 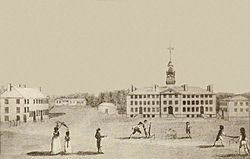 The Hanover Water Company supplies water for downtown Hanover from several local reservoirs. The company is owned by Dartmouth College (52.8%) and the Town of Hanover (47.2%), with management by the Town of Hanover under a contract. In 2000, all full-time company employees became town employees. In recent years, the town has spent over $20 million to upgrade main water lines, and will undergo another $6 million project to build a new water treatment plant. Outside the downtown area, residents rely on private wells that are not maintained by the town.

All content from Kiddle encyclopedia articles (including the article images and facts) can be freely used under Attribution-ShareAlike license, unless stated otherwise. Cite this article:
Hanover, New Hampshire Facts for Kids. Kiddle Encyclopedia.