Kids Encyclopedia Facts
For other places with the same name, see Lebanon (disambiguation).

Lebanon is a city in Grafton County, New Hampshire, United States. The population was 13,151 at the 2010 census. Lebanon is located in western New Hampshire, south of Hanover, near the Connecticut River. It is the home to Dartmouth-Hitchcock Medical Center and Dartmouth Medical School, together comprising the largest medical facility between Boston, Massachusetts and Burlington, Vermont.

Together with Hanover, New Hampshire, and White River Junction, Vermont, Lebanon today is at the center of a Micropolitan Statistical Area, encompassing nearly 30 towns along the upper Connecticut River valley.

Lebanon was chartered as a town by Colonial Governor Benning Wentworth on July 4, 1761, one of 16 along the Connecticut River. It was named for Lebanon, Connecticut, from where many early settlers had come or would come, including the Rev. Eleazar Wheelock, who arrived in 1770 and founded Dartmouth College. Lebanon, Connecticut was the original home of Moor's Indian Charity School, the antecedent of Dartmouth College.

Early settlement concentrated along the Connecticut River in what is now West Lebanon, and along the Mascoma Lake region near Enfield. In the mid-19th century, a mill district developed at falls on the Mascoma River. Industries included, at various times, furniture mills, a tannery, several machine shops, a woolen textile mill and a clothing factory. In the mid-19th century, this district attracted many French workers from Canada's Quebec province. This became the center of town, although West Lebanon grew into a railroad hub with a separate identity after lines entered from Boston. This rail center would become known as Westboro after two trains collided when West Lebanon was mistaken for Lebanon.

The mill district, like the railroad, declined into the 1950s and 1960s. The town suffered two major fires; the second, in 1964, destroyed a large portion of the old mill district. Reconstruction resulted in a controversial urban renewal project featuring a closed-off district, called The Mall, built to replace the destroyed Hanover Street area. Partly in defiance of economic decline, and partly to counter a movement by West Lebanon to declare itself an independent town, Lebanon re-incorporated as a city in 1958.

The routing of Interstates 89 and 91 through Lebanon and nearby White River Junction, Vermont, in addition to the growth of Dartmouth College, led to the area's economic revival. The former mill town now has a mixed economy based on education, medical services, high-technology and retail. Just south of the village of West Lebanon, a major shopping district has sprung up at the intersection of Route 12A and I-89. Lebanon has undertaken improvements to its recreational facilities, including miles of hiking trails, a municipal ski area, a swimming pool and several sports fields.

In 1991, the Dartmouth-Hitchcock Medical Center, along with most departments of Dartmouth Medical School, moved from Hanover to a new campus just south of the Lebanon-Hanover town line. A number of medical and high-tech firms have located facilities near the medical center campus. Tele Atlas, a leading worldwide developer of mapping databases, has its North American headquarters in Lebanon. Novell and Microsoft also have major facilities here, as well as Novo Nordisk. 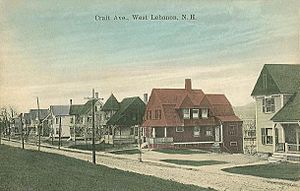 There were 6,186 households out of which 24.2% had children under the age of 18 living with them, 40.5% were married couples living together, 8.9% had a female householder with no husband present, 3.4% had a male house holder with no wife present, and 47.2% were non-families. 36.8% of all households were made up of individuals, and 12.4% were someone living alone who was 65 years of age or older. The average household size was 2.10, and the average family size was 2.76. 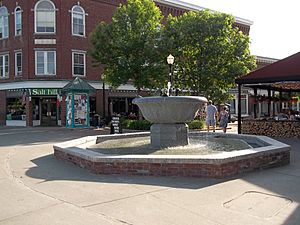 Lebanon Airport, adjacent to West Lebanon, has passenger service to Boston and New York City provided by Cape Air. Free public bus service for the major towns in the area including Lebanon is provided by Advance Transit, with weekday service to destinations such as Dartmouth–Hitchcock Medical Center, shopping plazas in West Lebanon, the villages of Lebanon and West Lebanon, as well as Hanover and White River Junction. CRT "the Current" also provides a peak direction commuter bus route between DHMC to Bellows Falls, Vermont that also runs on weekdays. 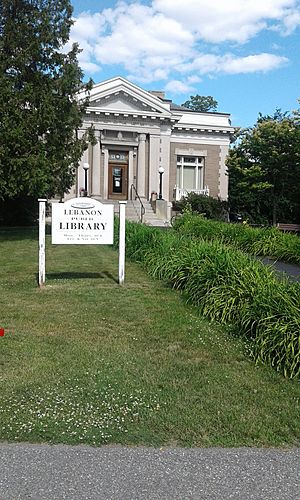 Lebanon Public Library, one of many Carnegie libraries in New Hampshire

The Colburn Park Historic District is at the heart of Lebanon, New Hampshire, consisting of Colburn Park and buildings around it—and many 19th-century buildings immediately adjacent to these. The district was listed on the National Register of Historic Places in 1986. The land that later developed into the park was donated in 1792 by Robert Colburn as the site for the community's meeting house, serving the purposes of church and town hall. Arterial roads were built to the area, and it began to develop as a commercial and civic center in the early 19th century. A weekly farmers market is held there today, when the weather allows.

All content from Kiddle encyclopedia articles (including the article images and facts) can be freely used under Attribution-ShareAlike license, unless stated otherwise. Cite this article:
Lebanon, New Hampshire Facts for Kids. Kiddle Encyclopedia.