West Lebanon is an unincorporated community (pop. approx 3,500) within the city of Lebanon, New Hampshire, on the Connecticut River. The area contains a major shopping plaza strip along New Hampshire Route 12A, serving the Upper Valley communities along Interstates 89 and 91. West Lebanon also hosts the Lebanon Municipal Airport, a number of small software and tech businesses, and a regional daily newspaper, the Valley News. The village serves as a bedroom community for nearby Dartmouth College.

West Lebanon was the site of Lebanon's first settlement in 1761. Later the village became a regionally important rail hub, although at that time it was better known to rail travelers as Westboro. By the 1950s, however, the rail industry had shrunk significantly. The village of White River Junction, Vermont, across the Connecticut River, took most of the remaining services, and the rail service through West Lebanon was terminated.

Today commerce has replaced transportation as the basis of the economy, and West Lebanon serves as the commercial hub for a United States micropolitan area of over 170,000 people. Seminary Hill School is located in the area. 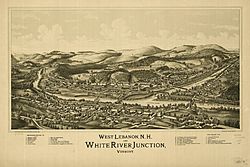 All content from Kiddle encyclopedia articles (including the article images and facts) can be freely used under Attribution-ShareAlike license, unless stated otherwise. Cite this article:
West Lebanon, New Hampshire Facts for Kids. Kiddle Encyclopedia.