Claremont is a city in Sullivan County, New Hampshire, United States. The population was 13,355 at the 2010 census.

Before colonial settlement, the Upper Connecticut River Valley was home to the Pennacook and Western Abenaki (Sokoki) peoples, later merging with members of other Algonquin tribes displaced by the wars and famines that accompanied the European settling of the region. The Hunter Archeological Site, located near the bridge connecting Claremont with Ascutney, Vermont, is a significant prehistoric Native American site that includes seven levels of occupational evidence, including evidence of at least three longhouses. The oldest dates recorded from evidence gathered during excavations in 1967 were to AD 1300. 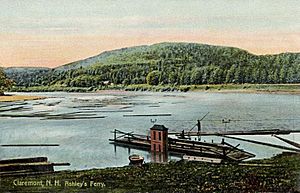 The city was named after Claremont, the country mansion of Thomas Pelham-Holles, Earl of Clare. On October 26, 1764, Colonial Governor Benning Wentworth granted the township to Josiah Willard, Samuel Ashley and 67 others. Although first settled in 1762 by Moses Spafford and David Lynde, many of the proprietors arrived in 1767, with a large number from Farmington, Hebron and Colchester, Connecticut. The undulating surface of rich, gravelly loam made agriculture an early occupation. Spafford was deeded land from Col. Samuel Ashley, who was given a charter to establish a ferry across the Connecticut River in 1784, the location of which is still known as Ashley's Ferry landing. Spafford was also the first man to marry in Claremont, and his son, Elijah, was the first white child to be born in the town.

The Union Episcopal Church in West Claremont was built in 1773, and is the oldest surviving Episcopal church building in New Hampshire and the state's oldest surviving building built exclusively for religious purposes. The parish was organized in 1771 and chartered by the New Hampshire legislature in 1794 as Union Church Parish. Located across the street, Old St. Mary's Church, built in 1823 mostly in the Federalist style, was the first Roman Catholic church in New Hampshire. It was discontinued in 1870 in favor of the new St. Mary's Church in the Lower Village District.

During the American Revolution, Claremont had a large number of loyalists, who used a small wooded valley in West Claremont called the Tory Hole to hide from the patriots. In 1777, when the New Hampshire Grants declared their own sovereignty as the Vermont Republic, Claremont was one of sixteen New Hampshire towns inclined to join them, and made multiple attempts to do so.

Claremont's first millwright was Col. Benjamin Tyler, who arrived in the area from Farmington, Connecticut, in the spring of 1767. Tyler built mills using stone quarried from his land on nearby Mount Ascutney, and built Claremont's first mill on the Sugar River on the site of the Coy Paper Mill. Tyler also invented the wry-fly water wheel, which was the subject of the Supreme Court case Tyler v. Tuel. His grandson John Tyler evolved the technology to create the Tyler Water Wheel and the Tyler Turbine. Tyler's grandson was Benjamin Tyler Henry, inventor of the Henry Repeating rifle, manufactured in neighboring Windsor, Vermont, and used in the Civil War.

The water power harnessed from the Sugar River brought the town prosperity during the Industrial Revolution. Large brick factories were built along the stream, including the Sunapee Mills, Monadnock Mills, Claremont Machine Works, Home Mills, Sanford & Rossiter, and Claremont Manufacturing Company. Principal products were cotton and woolen textiles, lathes and planers, and paper. Although like other New England mill towns, much industry moved away or closed in the 20th century, the city's former prosperity is evident in some fine Victorian architecture, including the 1897 city hall and opera house.

The Monadnock Mills Co. and Sullivan Mills Co. were responsible the two most prominent collections of manufacturing structures in the Lower Village District. Monadnock Mills' textile operations began with its founding in 1842, and lasted through 1932, shuttering operations following the decline of the textile industry in New England during the 1920s. By the 1920s, Sullivan Mills Co. had become New Hampshire's largest machining company, as well as Claremont's largest employer. Sullivan's Machinery division merged with Joy Mining Machinery in 1946, becoming Joy Manufacturing Co. Its founder, inventor Joseph Francis Joy, stayed on as general manager of the facility. which remained the dominant employer in Claremont through the 1970s, when manufacturing technology had advanced sufficiently to hamper sales and productivity. Parts of the campus suffered fires in 1979 and 1981, and the branch was closed in 1983 and sold in 1984.

In March 1989, the Claremont School Board voted to initiate a lawsuit against the State of New Hampshire, claiming that the state's primary reliance upon local property taxes for funding education resulted in inequitable educational opportunities among children around the state and a violation of their constitutional rights. Following a lawsuit and a series of landmark decisions, the New Hampshire Supreme Court agreed. Known as the "Claremont Decision", the suit continues to drive the statewide debate on equitable funding for education, and Claremont continues to play a primary role in this legal challenge. 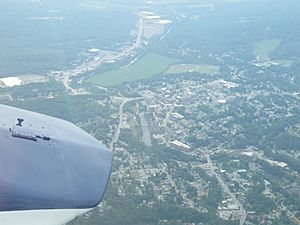 Downtown Claremont from the west, July 2016

According to the United States Census Bureau, the city has a total area of 44.1 square miles (114.2 km2), of which 43.1 square miles (111.7 km2) is land and 0.97 square miles (2.5 km2) is water, comprising 2.19% of the town. The Connecticut River forms the western boundary of the city, and the boundary between New Hampshire and Vermont. The Sugar River flows from east to west through the center of Claremont and empties into the Connecticut. The highest point in the city is the summit of Green Mountain, at 2,018 feet (615 m) above sea level in the northeastern part of the city. Claremont lies fully within the Connecticut River watershed.

The only city within Sullivan County, Claremont is home to Claremont Municipal Airport. By highway, it is located 21 miles (34 km) south of Interstate 89 in Lebanon, New Hampshire, and 5 miles (8 km) east of Interstate 91 in Weathersfield, Vermont. It is served by state routes 11, 12, 12A 103, and 120. Routes 11 and 103 travel east as a concurrency to Newport, with Route 11 continuing east to New London and Franklin, while Route 103 turns southeast to Bradford and Warner. Routes 11 and 12 lead south as a concurrency to Charlestown. West from downtown, Route 12 leads into Vermont, then turns north to Windsor. Route 120 leads north from downtown through Cornish and Meriden to Lebanon. Route 12A bypasses downtown Claremont to the west, leading south to Charlestown and north to West Lebanon. 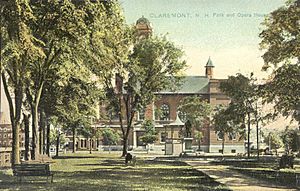 A commercial area centered on Washington Street is Claremont's primary commercial district. An Italian Renaissance-styled City Hall building, which houses the historic Claremont Opera House, was built in 1897 and designed by architect Charles A. Rich. City Hall faces Broad Street Park, a rotary-style town square. This square connects Washington Street, Broad Street, and Main Street, which branch into different portions of the city. Broad Street Park contains war monuments to World War I, World War II, Korea and Vietnam, and Freedom Garden Memorial dedicated to the victims and families of September 11. Included are two Civil War cannon and the centrally-located Soldier's Monument, designed by Martin Milmore and dating to 1890. The park is also home to a historic bandstand, originally built in a Victorian style in 1890 and redesigned in 1922 in a Classical Revival style, which primarily serves as performance space for the Claremont American Band, a community band dating to about 1880. Parallel to Broad Street lies Pleasant Street, home to a downtown business district, which was the city's primary commercial zone until the development of the Washington Street district.

A number of mill buildings dot the Lower Village District in the city's center, along the Sugar River, and several attempts have been made at historic preservation of some of them.

To the north end of the town lies the Valley Regional Hospital, an out-patient resource of the popular Dartmouth-Hitchcock Medical Center of Lebanon. 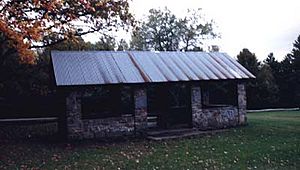 On the southern artery out of Claremont, Route 12, stood Highland View, the summer home of Claremont native William Henry Harrison Moody (1842–1925), who made his fortunes as a businessman and shoe manufacturer in the Boston area, but kept a residence in his hometown until his death. The large William H. H. Moody estate was known for its horses and its five large barns (the last of which burned in 2004 from a lightning strike), which once hosted several hundred imported horses on over 500 acres (2.0 km2). Its Victorian farmhouse stands at the top of Arch Road. In March 1916, a 175-acre (71 ha) portion of the estate was donated by Moody to the city of Claremont for a city park, the entrance of which is on Maple Avenue; facilities include tennis. A lone access road leads through a coniferous forest to the top of a hill, maintained as a large field by the city, with a large, open-air stone structure suitable for picnics. The park has several miles of interconnected walking trailways; several of these trails terminate at the Boston and Maine Railroad.

Claremont was the filming location, though not the setting, of the 2006 movie Live Free or Die, co-written and co-directed by Gregg Kavet and Andy Robin and starring Aaron Stanford, Paul Schneider, Michael Rapaport, Judah Friedlander, Kevin Dunn, and Zooey Deschanel. Set in fictional Rutland, New Hampshire, it is a picaresque comedy-drama about a small-town would-be crime legend. The name of the movie derives from the motto of the Granite State.

All content from Kiddle encyclopedia articles (including the article images and facts) can be freely used under Attribution-ShareAlike license, unless stated otherwise. Cite this article:
Claremont, New Hampshire Facts for Kids. Kiddle Encyclopedia.