Springfield is a town in Windsor County, Vermont, United States. As of the 2020 census, the population was 9,062. 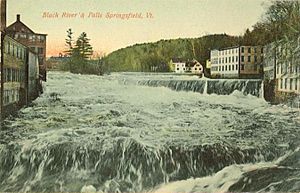 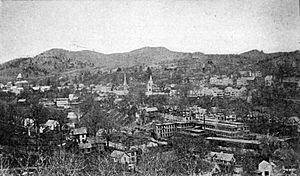 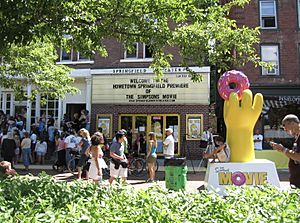 The Springfield Theater premiere of The Simpsons Movie, 2007

One of the New Hampshire grants, the township was chartered on August 20, 1761 by Governor Benning Wentworth and awarded to Gideon Lyman and 61 others. Although Springfield's alluvial flats made it among the best agricultural towns in the state, the Black River falls, which drop 110 feet (33.5 m) in 1/8 of a mile (201 m), helped it develop into a mill town. Springfield was located in the center of the Precision Valley region, home of the Vermont machine tool industry.

In 1888, the Jones and Lamson Machine Tool Company (J&L) moved to Springfield from Windsor, Vermont under the successful leadership of James Hartness. Gaining international renown for precision and innovation, J&L ushered in a new era of precision manufacturing in the area. Edwin R. Fellows co-founded the Fellows Gear Shaper Company here in 1896. As knowledge and infrastructure grew to support precision machining, other companies such as the Bryant Chucking Grinder Company and Lovejoy Tool formed, grew, and provided much of the economic engine. Springfield Telescope Makers, the oldest amateur telescope makers' club in the United States, has been headquartered in Springfield since its inception in 1920. The club's clubhouse, Stellafane, located on the campus of Stellafane Observatory has hosted a convention for the geographically scattered club since 1927. During World War II, Springfield's production of machine tools was of such importance to the American war effort that the US government ranked Springfield (together with the Cone at Windsor) as the seventh most important bombing target in the country.

Springfield is also home to the Eureka Schoolhouse, the oldest one-room school in the state of Vermont. Completed in 1790, the building was in continuous use until 1900 and was restored in 1968 by the Vermont Board of Historic Sites. The school house was named by its first teacher, David Searle, who, after a long journey through the new frontier was heard to cry "Eureka!" upon reaching the new settlement of Springfield. The name stuck, and "Eureka" can still be found in street and business names throughout Springfield.

Several sites in Springfield, including the historic downtown area, have been designated as having historical significance according to the National Register of Historic Places. Among them are the Hartness House (original home of the entrepreneur and governor) and the Gould's Mill Bridge, a steel truss bridge.

According to the United States Census Bureau, the town has a total area of 49.5 square miles (128.1 km2), of which 49.3 square miles (127.7 km2) is land and 0.2 square mile (0.4 km2) (0.30%) is water. Bounded on the east by the Connecticut River, Springfield is drained by the Black River, which flows directly through downtown. The town includes the village of North Springfield.

Springfield's public school system currently has two elementary schools, one middle school grades 6–8, and one high school grades 9-12. These schools are overseen by a five-member school board elected individually by staggered elections to three year terms. In 2006 the public technical school, the River Valley Technical Center, left the Springfield School District to form its own district. The Springfield School District is currently undertaking action to renovate its elementary schools. The School Board plans to expand Union Street School and Elm Hill School, while the voters decided in 2008 to cease using Park Street School as a school "As soon as possible" due to prohibitive refurbishment costs and safety issues.

The River Valley Technical Center is housed in the Howard Dean Education Center and is adjacent to Springfield High School. The RVTC teaches technical courses to the students of Springfield and surrounding towns of Chester, Bellows Falls, Westminster, Ludlow and Charlestown.

Springfield is home to branches of the Community College of Vermont and the University of Vermont, which are housed in the Howard Dean Education Center.

Springfield is crossed by Interstate 91 (Exit 7 serves the town), U.S. Route 5 and Vermont routes 10, 11, 106 and 143. Connecticut River Transit's the Current (CRT) provides Springfield with public transportation by bus around town and to Bellows Falls, Ludlow and the White River Junction and Lebanon, New Hampshire areas. The closest Greyhound bus and Amtrak train station is located in Bellows Falls, approximately 10 miles (16 km) to the south. 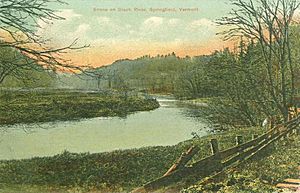 All content from Kiddle encyclopedia articles (including the article images and facts) can be freely used under Attribution-ShareAlike license, unless stated otherwise. Cite this article:
Springfield, Vermont Facts for Kids. Kiddle Encyclopedia.