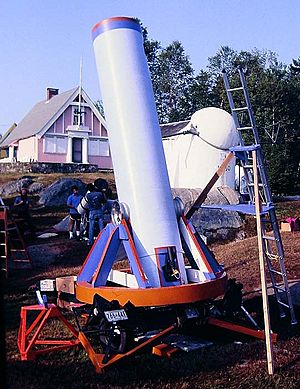 A large trailer mounted newtonian reflector on display during the Stellafane Convention with the Stellafane "pink clubhouse" and the Porter Turret Telescope in the background.

Stellafane (Latin for shrine to the stars) is the name of the clubhouse built by the Springfield Telescope Makers club of Springfield, Vermont in the early 1920s, and has since come to refer to the club's land and buildings on the summit of Breezy Hill. It also refers to the Stellafane Convention, a gathering of amateur telescope makers and amateur astronomers (star party) held every year at that location. The property is a National Historic Landmark.

The Springfield Telescope Makers grew out of a class on how to make telescopes that was started by Russell W. Porter in Springfield, Vermont on August 12, 1920. The members of this small group decided to form a club and held their first meeting on December 7, 1923. The Stellafane clubhouse was built in 1924 on a 3.5-acre (14,000 m2) plot belonging to Porter on the 1,270-foot (390 m) summit of Breezy Hill outside of town. The original 20 x 24-foot (7.3 m) clubhouse (with an 11 x 13-foot (4.0 m) ell added in 1926) included a meeting room, a kitchen, a workshop, and bunkrooms on the second floor. The building incorporated a polar Cassegrain telescope, a transit telescope (no longer functional), a solar telescope, and a sundial, on the south wall. The name Stellafane (originally suggested by Porter at the club's January 1924 meeting) comes from the Latin words stella meaning star, and fane meaning shrine which together means "Shrine to the Stars". Besides the historic Stellafane "pink clubhouse," the site includes Porter's uniquely designed Turret Telescope, a 12-inch (300 mm) f/17 Newtonian reflector that was completed in 1931. This telescope consists of an equatorially rotated concrete dome with the telescope mounted on the outside, with the observer on the inside working in heated comfort. Stellafane is still the location where the Springfield Telescope Makers hold most of their meetings. The clubhouse and the observatory housing Porter's telescope were designated a National Historic Landmark in 1989, in recognition for the club's pioneering role in the popularization of astronomy and the amateur construction of telescopes.

The Stellafane Convention is held every year on the club's land and buildings on the summit of Breezy Hill. It was started by Porter and the Springfield Telescope Makers in 1926, as an occasion for some 20 amateur telescope makers to compare telescopes and exchange ideas. It has since become the longest running astronomical convention in the United States. Thousands of amateur telescope makers from all over the world gather to share their innovations, join in competitions, and enjoy the night sky. The convention is generally held over the weekend of the new moon closest to the height of the Perseid meteor shower (usually early August).

Although the amateur telescope competition and display is still held on the original site around the clubhouse, most of the convention activities since the mid-1980s have taken place on "Stellafane East," an annex to the original land, and a modest walk over Breezy Hill.

Stellafane East is home to the more recent McGregor Observatory which boasts a 13" Schupmann telescope, the Flanders Pavilion dedicated in 2006, as well as other buildings on the site.

The Stellafane logo on the cornerstone of the McGregor Observatory

All content from Kiddle encyclopedia articles (including the article images and facts) can be freely used under Attribution-ShareAlike license, unless stated otherwise. Cite this article:
Stellafane Facts for Kids. Kiddle Encyclopedia.