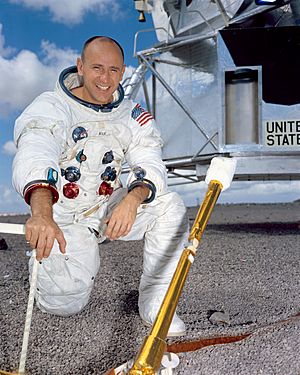 Portrait of Astronaut Alan L. Bean, Prime Crew Lunar Module Pilot of the Apollo 12 Lunar Landing Mission, in his space suit minus the helmet. He is standing outside beside a mock-up of the Lunar Lander.

He was the fourth person to walk on the Moon. He was selected to become an astronaut by NASA in 1963 as part of Astronaut Group 3. He made his first flight into space aboard Apollo 12, the second manned mission to land on the Moon, at the age of thirty-seven years in November 1969.

All content from Kiddle encyclopedia articles (including the article images and facts) can be freely used under Attribution-ShareAlike license, unless stated otherwise. Cite this article:
Alan Bean Facts for Kids. Kiddle Encyclopedia.