Richard Francis Gordon Jr. (October 5, 1929 – November 6, 2017) was an American naval officer and aviator, chemist, test pilot, and NASA astronaut, and an American football executive. He was one of 24 people to have flown to the Moon, as the Command Module Pilot of the 1969 Apollo 12 mission which orbited the Moon 45 times. Prior to his lunar flight Gordon had flown in space as the Pilot of the 1966 Gemini 11 mission.

Richard Francis Gordon Jr. was born in Seattle, Washington, on October 5, 1929, the first of five children of Richard Francis Gordon Sr., a machinist, and his wife, Angela, an elementary school teacher. He was a Boy Scout, and earned the rank of Star Scout. He graduated from North Kitsap High School in Poulsbo, Washington, in 1947, then entered the University of Washington, from where he received a Bachelor of Science degree in chemistry in 1951.

Gordon joined the United States Navy, and received his wings as a Naval Aviator in 1953. He then attended All-Weather Flight School and jet transitional training, and was subsequently assigned to an all-weather fighter squadron at Naval Air Station Jacksonville, Florida.

In 1957, he attended the United States Naval Test Pilot School at Naval Air Station Patuxent River, Maryland, and served as a flight test pilot until 1960. During this tour of duty, he did flight test work on the F-8U Crusader, F-11F Tiger, North American FJ Fury, and A-4D Skyhawk, and was the first project test pilot for the F4H-1 Phantom II. He served with Fighter Squadron 121 (VF-121) at the Naval Air Station Miramar, California, as a flight instructor in the F4H-1 and participated in the introduction of that aircraft to the Atlantic and Pacific Fleets. He was also flight safety officer, assistant operations officer, and ground training officer for Fighter Squadron 96 (VF-96) at Miramar. He logged more than 4,500 hours flying time with 3,500 hours of those hours in jet aircraft. He was also a student at the Naval Postgraduate School at Monterey, California.

He won the Bendix Trophy race from Los Angeles to New York City in May 1961, flying an F4H-1 in which he established a new speed record of 869.74 miles per hour and a transcontinental speed record of 2 hours and 47 minutes. 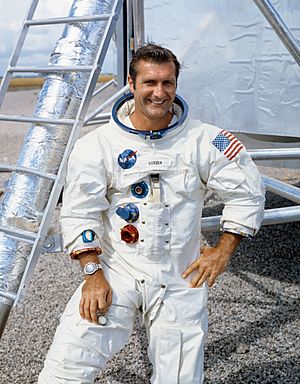 Gordon was one of the third group of astronauts, named by NASA in October 1963. He had been a finalist for the second selection, in 1962. 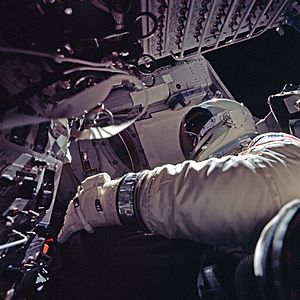 Gordon during his Gemini 11 flight

Gordon served as backup Pilot for the Gemini 8 flight. In September 1966, he made his first space flight, as Pilot of Gemini 11, alongside Pete Conrad. At the time, the flight set an altitude record of 1,369 kilometres (851 mi), which still stands as the highest-apogee Earth orbit. Gordon was already good friends with Conrad, who had once been his roommate on the aircraft carrier USS Ranger. On the flight, Gordon performed two spacewalks, which included attaching a tether to the Agena and retrieving a nuclear emulsion experiment package.

Gordon was subsequently assigned as backup Command Module Pilot for Apollo 9. In November 1969, he flew as Command Module Pilot of Apollo 12, the second crewed mission to land on the Moon. While his crewmates, Pete Conrad and Alan Bean, landed in the Ocean of Storms, Gordon remained in lunar orbit aboard the Command Module, Yankee Clipper, photographing tentative landing sites for future missions. 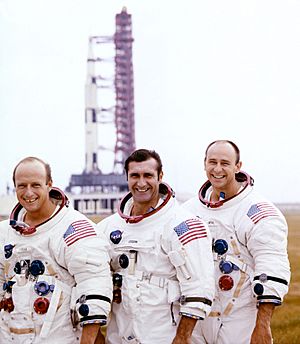 Pete Conrad, Dick Gordon, and Alan Bean pose with their Apollo 12 Saturn V Moon rocket in the background on the pad at Cape Canaveral on 29 October 1969

After his flights, Gordon worked in the astronaut office. He became the chief of advanced programs in 1971. Gordon worked on the design of the Space Shuttle.

In March 1982 he became President of Astro Sciences Corporation. This company provides a range of services including engineering, project management, project field support teams, to software and hardware system design for control room applications. In the summer of 1984, Gordon was a technical advisor for and played the part of "Capcom" in the CBS miniseries Space by James A. Michener.

Gordon served as Chairman and co-Chairman of the Louisiana Heart Fund, Chairman of the March of Dimes (Mother's March), Honorary Chairman for Muscular Dystrophy, and on the boards of directors for the Boy Scouts of America and Boys' Club of Greater New Orleans.

From his marriage (which ended in divorce) to his first wife Barbara Field, who died in 2014, Gordon had six children. He died in San Marcos, California on November 6, 2017, at the age of 88. He was survived by five of his children, Carleen Trevino, Richard, Lawrence, Thomas and Diane Briggs; his sisters Barbara Pethick and Mary Frederick, and brother Norman; and two stepchildren, Traci and Christopher, from his second wife Linda, who died on September 12, 2017. His hobbies included water skiing and golf.

Gordon was a fellow of the American Astronautical Society, an associate fellow of Society of Experimental Test Pilots and a member of the Navy League.

In the 1998 HBO miniseries From the Earth to the Moon Gordon was played by Tom Verica.

All content from Kiddle encyclopedia articles (including the article images and facts) can be freely used under Attribution-ShareAlike license, unless stated otherwise. Cite this article:
Richard F. Gordon Jr. Facts for Kids. Kiddle Encyclopedia.