Kids Encyclopedia Facts
This page is about a town in Washington. For the Intel Poulsbo chipset, see System Controller Hub.

Poulsbo (/ˈpɔːlzboʊ/ PAWLZ-boh) is a city on Liberty Bay in Kitsap County, Washington, United States. It is the fourth largest city in Kitsap County. The population was 9,200 at the 2010 census.

Prior to the arrival of Scandinavian immigrants in the 1880s, the Suquamish people had names for several areas in what is now Poulsbo; one of those names, tcu-tcu-lats, means "place of the maples". Their ancestors occupied villages on the Liberty Bay shoreline — among them, ho-CHEEB — for at least 5,000 years, hunted in local forests and floodplains, fished in bays and streams here, and harvested shellfish along the marine shoreline.

After the signing of the Treaty of Point Elliott in 1855, most Suquamish people here relocated to the Port Madison Indian Reservation, although the Suquamish Tribe reserved — and to this day exercises — certain cultural and natural resource rights in their historical territory, including Poulsbo.

The first Scandinavians arrived in the 1880s, several after attempts to establish farms in the Midwest. They were drawn here by the availability of land, by the area's rich resources, and by a landscape similar to their native home. Poulsbo was founded by Jorgen Eliason of Fordefjord, Norway, when the primary method of travel was water. Supplies were brought the 18-mile trip from Seattle by rowboat and later by steamboat. Over a 60-year period, the "Mosquito Fleet", comprising more than a dozen steamboats, served Poulsbo and other locations along Liberty Bay and Puget Sound carrying passengers and freight to and from Poulsbo and delivering farmers' produce to Pike Place Market in Seattle.

As a reminder of the city's early Scandinavian immigrants, downtown Poulsbo maintains a Scandinavian theme and is a popular regional tourist destination. One of its local products is now available worldwide, Poulsbo Bread, originally made in the local bakery. Many visitors arrive by boat; there are three marinas near the town, and the town's harbor is an excellent anchorage. 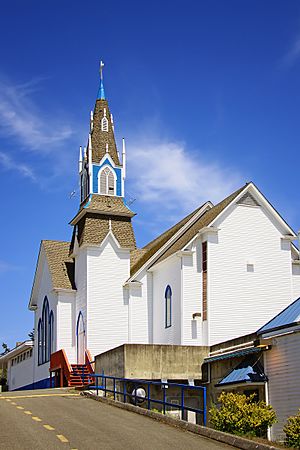 Founded by Norwegian immigrant Jorgen Eliason in the 1880s, Poulsbo was settled in its early years by a large number of Norwegian and other Scandinavian immigrants because of its similarities to their native countries. In 1886, I.B. Moe, one of the early Norwegian settlers, suggested that the community should have a post office. Moe suggested the town be named Paulsbo (which translates as "Paul's place"), after the Norwegian village where Moe spent his early years. The community's petition for a post office was granted, and Moe became the first postmaster, but the authorities in Washington D.C. misspelled the town's name, probably because of illegible handwriting, and the community became known as Poulsbo thereafter. Poulsbo was officially incorporated on December 18, 1907.

Until World War II, many Poulsbo residents retained Norwegian as a primary language. However, during World War II, the military constructed about 300 residential units to provide housing for workers at the nearby Puget Sound Naval Shipyard, located in Bremerton, Washington. The population of Poulsbo almost tripled over three years, and the diversification of the population led to the dominance of English as the primary language.

On October 22, 1975, King Olav V of Norway visited Poulsbo as part of the celebration of 150 years of Norwegian settlement in the United States.

The North Kitsap Herald has been published in print continuously since 1901, providing local news for Poulsbo as well as the greater Kitsap County area. The Herald was founded by Peter Iverson, who served as mayor of Poulsbo and state legislator. Today, the Herald is owned by Sound Publishing. Other Sound newspapers in Kitsap are the Bainbridge Island Review, Bremerton Patriot, Central Kitsap Reporter, Port Orchard Independent; and two monthlies, Kingston Community News and Kitsap Military Times.

The Norseman Statue a 12-foot statue by artist Mark Gale of Tacoma stands at Viking Avenue and Lindvig Way. 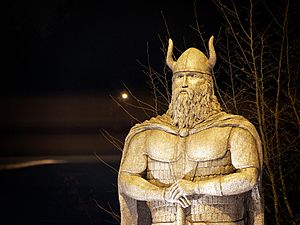 The Norseman is 12-foot tall Viking statue by artist Mark Gale of Tacoma made of steel and concrete that sits at the southeast corner of the Viking Avenue-Lindvig Way. 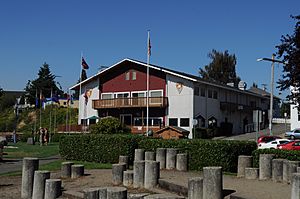 There were 3,883 households of which 30.8% had children under the age of 18 living with them, 44.9% were married couples living together, 11.4% had a female householder with no husband present, 3.2% had a male householder with no wife present, and 40.5% were non-families. 34.7% of all households were made up of individuals and 17.4% had someone living alone who was 65 years of age or older. The average household size was 2.30 and the average family size was 2.97.

There were 2,845 households out of which 30.9% had children under the age of 18 living with them, 48.6% were married couples living together, 10.9% had a female householder with no husband present, and 37.7% were non-families. 32.1% of all households were made up of individuals and 15.8% had someone living alone who was 65 years of age or older. The average household size was 2.30 and the average family size was 2.92.

The median income for a household in the city was $38,875 and the median income for a family was $51,353. Males had a median income of $40,482 versus $27,899 for females. The per capita income for the city was $20,649. 9.1% of the population and 8.2% of families were below the poverty line. Out of the total population, 14.1% of those under the age of 18 and 6.0% of those 65 and older were living below the poverty line. A large number of employed individuals work on the east side of Puget Sound, in Seattle or other King County cities, and commute to work by ferry.

All content from Kiddle encyclopedia articles (including the article images and facts) can be freely used under Attribution-ShareAlike license, unless stated otherwise. Cite this article:
Poulsbo, Washington Facts for Kids. Kiddle Encyclopedia.