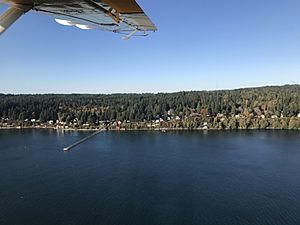 Indianola beach seen from a seaplane.

Indianola is a census-designated place (CDP) in Kitsap County, Washington, United States, located on the north shore of Port Madison on the Port Madison Indian Reservation, home of the Suquamish Indian Tribe. The population was 3,500 at the 2010 census. It was originally established as a summer community and was a stop for Mosquito Fleet ferries until the 1950s.

Indianola was formed on the portion of the Port Madison Indian Reservation which had been allotted to KaKue aka "Beedee" in 1886. KaKue died in December 1886 leaving no will and his wife Tu Tue Tue was sole heir. Tu Tue Tue died four years later in 1890 leaving a brother and a sister Tar-de-blu & a daughter Katie. After the death of Tar-de-blu the estate was settled in 1909 leaving Chief Jacob the son of Tar-de-blu as sole heir. When Katie died childless in 1896 her husband Alpheus Loughrey was sole heir. Alpheus had four sons from a previous marriage and the allotment eventually passed to his sons, Alpheus was a white man who had married Katie, the daughter of KaKue aka Beedee and Tu-Tue-Tue. KaKue aka "Beedee" was not related to Cyrus Beede Pickrell who was an Indian agent in Suquamish from 1906-1916 or to Cyrus Beede who was at the time the US Indian Inspector.

Development began in 1916 with the formation of the Indianola Beach Land Company by W. L. Gazzam to promote real estate sales on the land owned by the Loughreys. A dock and a store were built as amenities to attract buyers; a second store, the Beachcomber, was built the next year. From the beginning, Indianola has been a vacation community, with its population inflating considerably in the summertime.

In the early 20th century, most transportation on Puget Sound was by steamer, and a community’s dock was often its only lifeline to the outside world. Such was the case for the young community of Indianola Beach, and by 1918 a steamer was docking there every weekend. Daily ferry service was initiated in 1919 when Carl Hendrix organized twelve passengers to pay in advance for one year’s daily service between Indianola Beach and Seattle. Hendrix and his wife established a school the same year.

Cyrus Beede Pickrell, who had been Indian Agent for the Port Madison Reservation, moved to Indianola Beach from Suquamish with his family in 1920. Postal service had been discontinued, so when the Pickrells opened a new store, they housed the postal operation at Indianola Beach with Cyrus as Postmaster. Around this time, the Postmaster General took issue with the double name of Indianola Beach and the post office was renamed Kitsap in honor of Chief Kitsap of the Suquamish tribe.

Plans to establish a library and community hall were cause for much activity and development in the 1920s. Lots were auctioned off and a carnival was held in 1927 to raise funds. The Indianola Beach Improvement Club was incorporated in 1928 to raise more building money. The Club acquired some lots from W. L. Gazzam, which were raffled off with the proceeds going toward the purchase of property on which to build the structure. The Indianola Clubhouse was finally built in 1930.

By 1929, three passenger boats left the Indianola dock for Seattle every day, and the 1930s brought more connections to the outside world. A power line was strung in 1930, and phone service was established in 1934. The Port of Indianola was established in 1933 after a special election. The dock, which had previously only accommodated passengers, was widened and reinforced to allow auto access. In 1935, Kitsap County began taking surveys to build a road to connect Indianola and Suquamish; when the road was completed in 1939, it was the first time Indianola was accessible by other means of transportation than boat.

Road access to Indianola changed the character of the community somewhat, as the community now had access to more amenities in Kitsap and was no longer self-contained. The school closed in 1941 after more than twenty years of classes. Kitsap County’s naval bases and facilities brought a population boom during World War II, and many families settled in Indianola. Ferry service was discontinued in Fall of 1951 after the Agate Pass Bridge opened and the Washington State Ferries took over ferry service on Puget Sound.

It was not until after 1957 that the name of the post office was changed from Kitsap to Indianola, due to the confusion caused by its sharing a name with the county.

There were 1,140 households, out of which 40.4% had children under the age of 18 living with them, 62.9% were married couples living together, 8.8% had a female householder with no husband present, and 25.0% were non-families. 19.0% of all households were made up of individuals, and 4.3% had someone living alone who was 65 years of age or older. The average household size was 2.65 and the average family size was 3.04.

All content from Kiddle encyclopedia articles (including the article images and facts) can be freely used under Attribution-ShareAlike license, unless stated otherwise. Cite this article:
Indianola, Washington Facts for Kids. Kiddle Encyclopedia.