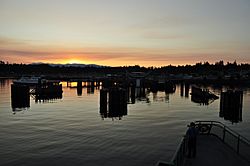 Kingston (formerly Appletree Cove) is a census-designated place (CDP) in Kitsap County, Washington, United States. The population was 2,099 at the 2010 census. Kingston is along the shores of Appletree Cove and the Puget Sound, and is home to a major Washington State Ferries terminal linking it to Edmonds.

Founded in 1853 by Benjamin Bannister the community was originally known as Appletree Cove, By 1880 it was a lumber town until the mill closed down in the early 20th century. But the local lumber yard is still in business today, owned by Tom Waggoner. Known as the "Little city by the sea", Kingston is the northern gateway to the Olympic Peninsula. Now it is the social and economic center of the north end of the Kitsap Peninsula.

In 1869, W.S. Ladd and his wife, Caroline built a cabin on Appletree Cove. Michael King then bought the cabin 9 years later. He moved in along with 10 oxen and 10 men. They slowly logged the hills around Appletree Cove. Mr. King built many small buildings and shacks along the shore for his men and animals. In 1882, he was done and moved on. The shacks and bunkhouses were left behind and lived in by drifters, squatters and old loggers. People living in the area often referred to this as King's Town, probably as a joke. The name slowly evolved into Kingston and stuck.

The Kingston townsite was platted on April 24, 1890 by C.C. Calkins and Samuel B. Brierly. Calkins dreamed of Kingston as a resort town for vacationers from Seattle. Calkins called it The Monterey of Washington. Calkins had drawings and designs for a giant hotel on the waterfront, with a boat launch, a church on the hill, along with a college. After Calkins and Brierly platted the town, a lower than expected number of people showed up to settle there. Calkins then gave up and left. The town slowly grew, but not at the pace that Calkins had dreamed.

There were 685 households out of which 30.1% had children under the age of 18 living with them, 54.9% were married couples living together, 7.3% had a female householder with no husband present, and 34.0% were non-families. 26.7% of all households were made up of individuals and 10.2% had someone living alone who was 65 years of age or older. The average household size was 2.35 and the average family size was 2.86.

Kingston has a Washington State Ferries terminal for auto/passenger service to Edmonds.

In September, 2012, due to financial losses the Port of Kingston discontinued its SoundRunner Kingston–Seattle passenger-only system. One of the former vessels, the Spirit of Kingston was transferred to the King County Ferry District on March 18, 2013 for service as part of the King County Water Taxi fleet.

In January 2016 the city of Kingston accepted delivery of a new modern fireboat. The new vessel is 38 feet (12 m) long, can travel at 36 knots (67 km/h), and can pump 2,700 gallons per minute. The Department of Homeland Security has provided small ports with grants to equip themselves with modern fireboats, with sealed cabins, that can also help counter other threats, like oil spills, or attacks by chemical or biological weapons. Two thirds of the cost of this fireboat, $409,813, were paid by a Federal grant. The vessel also has modern infrared sensors, which can help in search and rescue missions, and search for the hot-spot at the centre of a fire. Kingston had a smaller, slower, less capable older 27 feet (8.2 m) fireboat. Both vessels can project fire suppressant foam, less likely to sink flaming vessels, but experience with the older vessel suggests most of the fires the new vessel will fight will be on the shore, near the water.

All content from Kiddle encyclopedia articles (including the article images and facts) can be freely used under Attribution-ShareAlike license, unless stated otherwise. Cite this article:
Kingston, Washington Facts for Kids. Kiddle Encyclopedia.