Hansville is an unincorporated community in Kitsap County, Washington, United States. Its population was 3,091 as of the 2010 U.S. Census. The coastal community is located at the northern end of the Kitsap Peninsula and is about 14 miles (23 km) northeast of Poulsbo, the nearest city.

Point No Point, a low sandy spit that forms the northern beachside of what is now Hansville, was formerly the southern reach of the historic homeland of the Nuu-chah-nulth, whose generally recognized territory had, as its northern terminus, Vancouver Island.

Point No Point was first sighted by a European settler, and given its English name, during the United States Exploring Expedition of Puget Sound in 1841. Expedition leader Charles Wilkes gave the site its name because it appears much less of a promontory at close range than it does from a distance.

On January 25, 1855 Isaac Stevens, the governor of the newly organized Washington Territory, summoned a treaty council to Point No Point, which was attended by 1200 American Indians of the Chimakum, Klallam, and Skokomish tribes, Point No Point being a central midpoint between the tribal centers. The Point No Point Treaty was signed between the United States and the delegates of the tribes the following day. 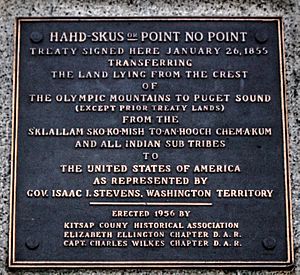 plaque on the Point No Point Treaty monument in Hansville

The first regular residents of Hansville were the lightkeepers of the Point No Point Light, which was constructed in 1879. In 1893 a Norwegian fisherman, the community's first permanent settler not affiliated with the lighthouse, came to the area. He was soon followed by other Norwegian emigres, including Hans Zachariasen, for whom Hansville was ultimately named.

In 1900 the Hansville Community Church was founded, with the first permanent structure for the congregation built nine years later. Hansville was connected to Point No Point and its lighthouse by a road constructed in 1908. In 1924 another road was built to nearby Kingston, allowing access to the isolated community by means other than boat or trail for the first time. The addition of the road helped develop Hansville into a resort fishing destination, but a decline in the sports fishery in the 1960s led to the closure of the lodges. In 1962 Driftwood Key was platted with 59 lots. By 2008 the homeowner association had grown to become the largest neighborhood in Hansville with 732 properties, approximately one-third of the residential lots in the community. 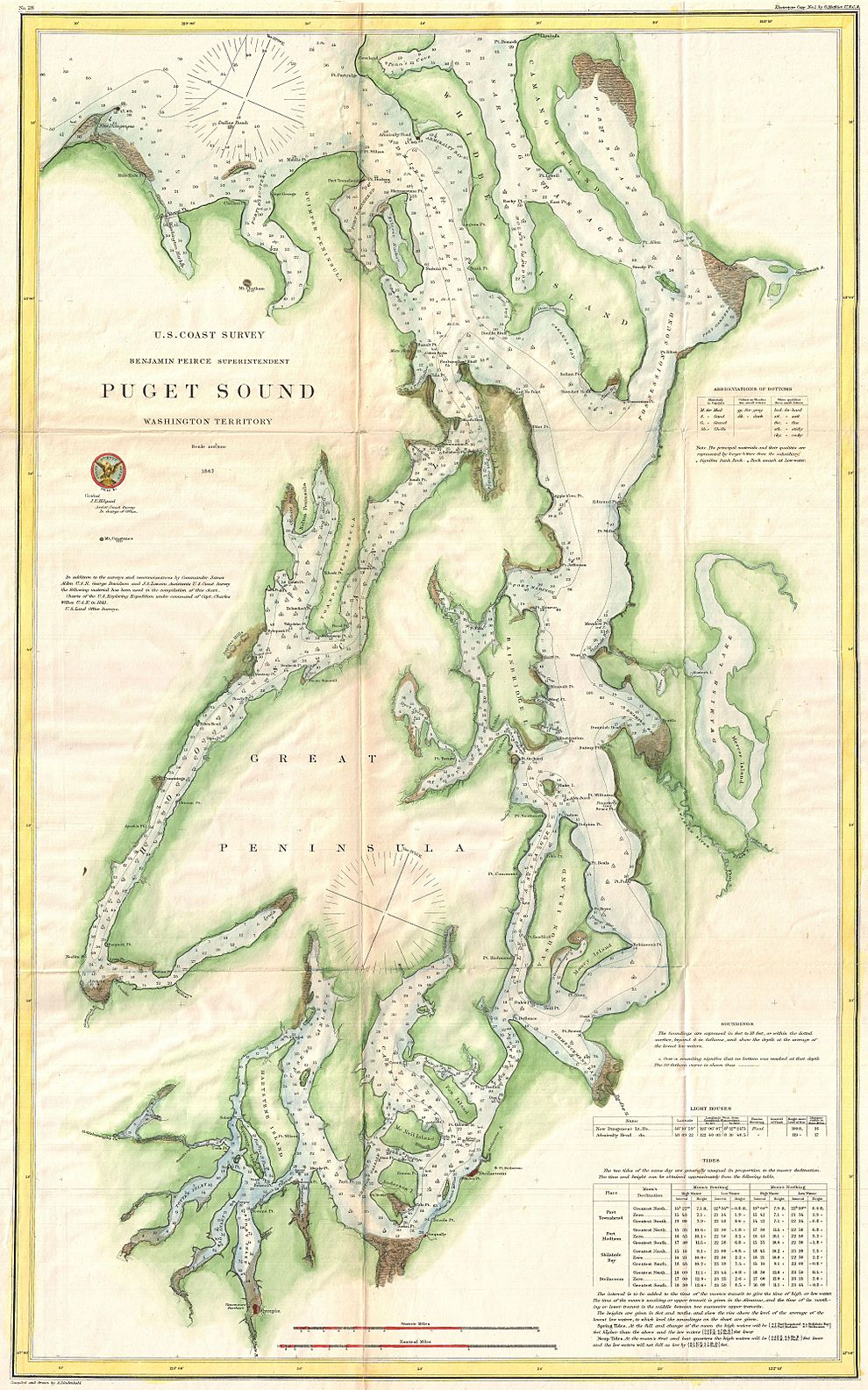 This 1867 U.S. Coast Survey map shows the Kitsap Peninsula, where Hansville is located.

Hansville is situated on the Northern Kitsap Peninsula, north of Kingston, Washington. On the west side of Hansville lies Hood Canal and the Coon Bay. The Foulweather Bluff is a small elevated peninsula on the northwest, while Point No Point resides to the east, facing Puget Sound. The Columbia Center is distantly visible to the southeast.

A 2010 survey conducted by Kitsap County found that about 70-percent of residents of Hansville lived in the community full-time, while the remainder maintained homes in the area as weekend or summer properties. 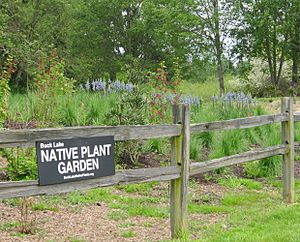 The Buck Lake Native Plant Garden is a demonstration garden that grows more than 100 plants native to the Pacific Northwest.

The three county parks in Hansville are connected by a network of trails created by conservation easements and collectively known as the Hansville Greenway.

Buck Lake County Park is a 20 acres (8.1 hectares) park that includes the eponymous Buck Lake. The park is owned and operated by Kitsap County and is co-located with the Buck Lake Native Plant Garden, a demonstration garden of plants native to coastal Oregon, Washington, and British Columbia that is curated by a private non-profit association. The garden was established in 2006 and includes more than 100 species of flora.

Norwegian Point County Park is a 3 acres (1.2 hectares) waterfront park that overlooks Admiralty Inlet and Whidbey Island. It includes a six-sided gazebo. The preserved remnants of one of Hansville's former fishing resorts is located at the site.

Point No Point Lighthouse and Park 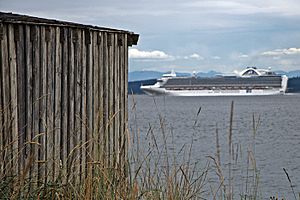 The M/S Crown Princess passes by Norwegian Point in Hansville.

All content from Kiddle encyclopedia articles (including the article images and facts) can be freely used under Attribution-ShareAlike license, unless stated otherwise. Cite this article:
Hansville, Washington Facts for Kids. Kiddle Encyclopedia.