Edmonds is a city in Snohomish County, Washington, United States, and is a Northern Suburb of Seattle located 11 miles (18 km) north of the city. Edmonds has a view of Puget Sound and both the Olympic Mountains and Cascade Range. The third most populous city in Snohomish County after Everett and Marysville, the population was 39,709 according to the 2010 census and the estimated population in 2015 was 40,490. Based on per capita income, one of the more reliable measures of affluence, Edmonds ranks 20th of 281 areas in the state of Washington.

Edmonds is the oldest incorporated city in Snohomish County. Logger George Brackett founded Edmonds in 1890, naming the city either for Vermont Sen. George Franklin Edmunds or in association with the nearby Point Edmund, named by Charles Wilkes in 1841 and later changed to Point Edwards. Brackett came to the future site of Edmonds while paddling a canoe north of Seattle, searching for timber. When a gust of wind hit his canoe, Brackett beached in a location later called "Brackett's Landing".

The town was named Edmonds in 1884, but was not incorporated until 1890 as an official "village fourth class" of Snohomish County. In that same year, Brackett sold 455 acres (1.84 km2) to the Minneapolis Realty and Investment Company. The town was plotted and a wharf was added along the waterfront. Modest houses and commercial structures sprouted up with a row of shingle mills dominating the cityscape.

In 1891, the Great Northern Railway came through and early settlers and investors grew hopeful that Edmonds would prosper. Unfortunately, the Panic of 1893 created business setbacks and the town owners foreclosed. Brackett reclaimed his town and along with other early settlers continued to develop its infrastructure. By 1900 there was regular passenger ferry service available by the steam-powered "mosquito fleet" of private ferryboats from Edmonds to Seattle.

Edmonds suffered major fires in 1909 and 1928, and many buildings were lost. The first car arrived in Edmonds in 1911. As more roads were established, Edmonds experienced steady growth along with commercial and residential development.

The Edmonds-South Snohomish County Historical Society resides in the city's only National Historic Place - the old Carnegie Library of Edmonds. Located on 5th Ave, it was built in 1910 to serve as a library and city hall, and opened to the public February 17, 1911. It now serves as the Edmonds Historical Museum. 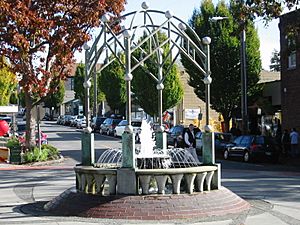 The Edmonds Fountain, a local landmark, has been a major source of contention over the past decades. The current Edmonds Fountain is located in the center of the intersection of 5th Avenue and Main St. Until 1970, every holiday season the Edmonds municipal Christmas tree stood on this spot. In 1970 the original fountain, an obscure twisted sculpture incorporating water elements, was erected. Often the target of high school pranks (such as adding soap so that bubbles poured from the fountain onto the street) and other local humor, that fountain and sculpture were wrecked in 1998 by a drunk driver. The city council and subsequent "Gazebo" subcommittee decided to build a new structure and a wooden gazebo was constructed a year later. In 2005, a driver crashed into it at night and the gazebo met the same fate as the earlier fountain. After a long discussion over whether to replace the gazebo or landscape the center of the roundabout, a decision was made to rebuild the gazebo/fountain, this time with steel rods extending from the main pillars deep underground. It was completed in the summer of 2006.

There were 17,381 households of which 25.0% had children under the age of 18 living with them, 49.0% were married couples living together, 9.1% had a female householder with no husband present, 3.7% had a male householder with no wife present, and 38.3% were non-families. 31.3% of all households were made up of individuals and 13% had someone living alone who was 65 years of age or older. The average household size was 2.26 and the average family size was 2.82.

There were 16,904 households out of which 26.1% had children under the age of 18 living with them, 52.0% were married couples living together, 8.7% had a female householder with no husband present, and 36.0% were non-families. 29.0% of all households were made up of individuals and 10.1% had someone living alone who was 65 years of age or older. The average household size was 2.32 and the average family size was 2.85. 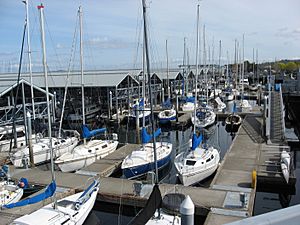 Edmonds hosts a variety of parks, including a dog park, a small skate park, a salt marsh and the Edmonds Underwater Park.

Edmonds Marsh is one of the few remaining urban saltwater estuaries in the Puget Sound area and is the first station on the Cascade Loop of Audubon Washington's Great Washington State Birding Trail.

In addition, Edmonds has one of the largest marine facilities in Snohomish County, the Port of Edmonds. The marina is partly artificial, being dredged to a depth of 13 feet (4.0 m), and can house 948 craft (668 in the water, and 280 in dry storage).

In 2006, the Edmonds Center for the Arts was opened. This is one of two current theaters available for general performing arts, the other being the theater at Mountlake Terrace High School.

Edmonds has one permanent, privately funded drama group, Edmonds Driftwood Players. Their theater, the Wade James Theatre, is located at 950 Main St., adjacent to Yost Park. Usually, they produce 5 mainstage performances per season, supplemented with 4 TIPs (Theatre of Intriguing Possibilities) alternative stage presentations. They have been present in the community since 1958. 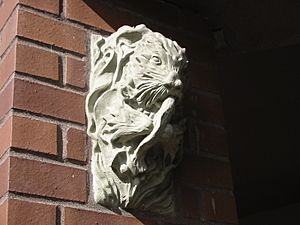 Since 1957, Edmonds has annually hosted the Edmonds Arts Festival, a three-day art exhibit, on Father's Day weekend. The festival is especially noted for painting and drawing. The festival is heavily involved with local schools, devoting several galleries to student artwork.

Every year the Edmonds Rotary sponsors the Edmonds Jazz Connection festival, on Memorial Day Weekend in May. During the day, the festival showcases the best of school-age and high school jazz groups, and the evening show features prominent, professional jazz musicians. The event is a large draw for both local and regional audiences.

The Edmonds community is home to a weekly news publication the Edmonds Beacon. The mayor writes a column each week in the paper, usually responding to current issues, citizen concerns, and planned city projects. An archive of all articles written by the mayor is found on the city website. MyEdmondsNews.com is a local news website.

The Edmonds Museum Summer Market, sponsored by the Edmonds-South Snohomish County Historical Society, is held each Saturday from May to September. Stretching from City Hall to the downtown area near the gazebo, the Summer Market is a large event attracting up to 2,000 people every Saturday. Mainstays of the market include cut flower stands, produce, handmade crafts and occasionally art.

Edmonds has one sister city:

Edmonds is a rail and ferry hub.

All content from Kiddle encyclopedia articles (including the article images and facts) can be freely used under Attribution-ShareAlike license, unless stated otherwise. Cite this article:
Edmonds, Washington Facts for Kids. Kiddle Encyclopedia.