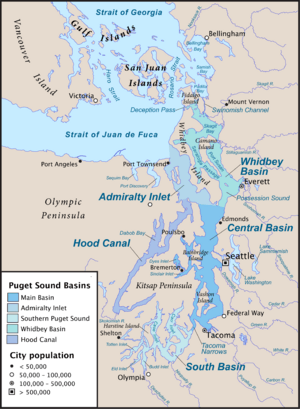 The Puget Sound region is a coastal area of the Pacific Northwest in the U.S. state of Washington, including Puget Sound, the Puget Sound lowlands, and the surrounding region roughly west of the Cascade Range and east of the Olympic Mountains. It is characterized by a complex array of saltwater bays, islands, and peninsulas carved out by prehistoric glaciers.

Poet Robert Sund called the Puget Sound region "Ish River country", owing to its numerous rivers with names ending in "ish", such as the Duwamish, Samish, Sammamish, Skokomish, Skykomish, Snohomish, and the Stillaguamish. The ish ending is from Salishan languages and means "people of". 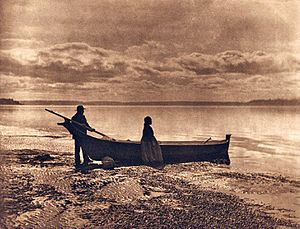 The Puget Sound region was formed by the collision and attachment of many terranes ("microcontinents") to the North American Plate between about 50 to 10 million years ago. About 15,000 years ago, the Puget Sound region was covered by a lobe of the Cordilleran Ice Sheet. This time period is known today as the Vashon Glaciation. The ice was about 3,000 feet (900 m) thick in the vicinity of Seattle. By the time Captain George Vancouver found the Sound, early native people had already been there for over 5,000 years.

George Vancouver explored Puget sound in 1792. Vancouver claimed it for Great Britain on 4 June 1792, naming it for one of his officers, Lieutenant Peter Puget. It became part of the Oregon Country, and became U.S. territory when the 1846 Oregon Treaty was signed.

After arriving along the Oregon Trail, many settlers wandered north to what is now Washington and settled the Puget Sound area. The first non-indigenous settlement was New Market (now known as Tumwater) in 1846. In 1853 Washington Territory was formed from part of Oregon Territory. In 1888 the Northern Pacific railroad line reached Puget Sound, linking the region to eastern states.

For a long period Tacoma was noted for its large smelters where gold, silver, copper and lead ores were treated. Seattle was the primary port for trade with Alaska and the rest of the country and for a time possessed a large shipbuilding industry. The region around eastern Puget Sound developed heavy industry during the period including World War I and World War II, and the Boeing Company became an established icon in the area.

During World War II the Puget Sound area became a focus for the war industry, with Boeing producing many of the nation's heavy bombers and the ports of Seattle, Bremerton and Tacoma available for shipbuilding.

Since 1995, Puget Sound has been recognized as an American Viticultural Area by the Alcohol and Tobacco Tax and Trade Bureau. 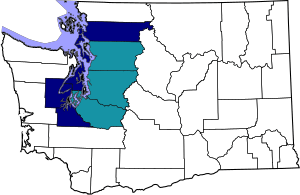 The Seattle Metropolitan area is the areas light blue. The Combined Statistical Area consists of both the light blue and dark blue areas.

The urban region designated the Puget Sound Region is centered on Seattle and consists of nine counties, two urban center cities and four satellite cities making up what has been dubbed "Pugetopolis". Both urban core cities have large industrial areas and seaports plus a high-rise central business district. The satellite cities are primarily suburban, featuring a small downtown core and a small industrial area or port. The suburbs consist mostly of residences, strip malls, and shopping centers. The region is also home to numerous ports. The two largest and busiest are the Port of Seattle and Port of Tacoma, which, if combined, comprise the third largest container port in North America after Los Angeles/Long Beach and New York/New Jersey.

The United States Census Bureau defines the Puget Sound region as the Seattle–Tacoma–Olympia Combined Statistical Area. This includes the Seattle metropolitan area, made up of the following counties (see Fig. STB):

Based on commuting patterns, the adjacent metropolitan areas of Olympia, Bremerton, and Mount Vernon, along with a few smaller satellite urban areas, are grouped together in the CSA. The population of this wider region is 4,269,349—almost two-thirds of Washington's population—as of 2012[update]. The Seattle CSA is the 12th largest CSA, and the 13th largest primary census statistical area in the country. The additional metropolitan and micropolitan areas included are:

A state-run ferry system, Washington State Ferries, connects the larger islands to the Washington mainland, as well as both sides of the sound, allowing cars and people to move about the greater Puget Sound region.

View of Puget Sound from the Space Needle 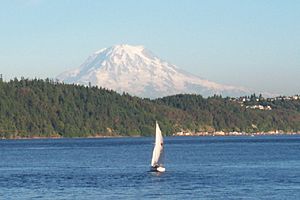 Snowcapped peaks are a backdrop to many Puget Sound scenes. Here, Mount Rainier is seen from Gig Harbor.

North Pacific Oak Woodland is one of the principal plant associations of the Puget Trough, where many of the soils are well drained mesic.

Counties of the Puget Sound region:

In addition, the San Juan Islands (all of San Juan County plus a few islands belonging to Whatcom County) are often considered part of the greater Puget Sound area. 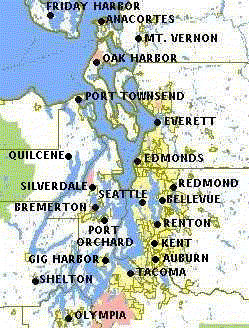 All content from Kiddle encyclopedia articles (including the article images and facts) can be freely used under Attribution-ShareAlike license, unless stated otherwise. Cite this article:
Puget Sound region Facts for Kids. Kiddle Encyclopedia.