The Tacoma Narrows Bridge is a pair of twin suspension bridges that span the Tacoma Narrows strait of Puget Sound in Pierce County, Washington. The bridges connect the city of Tacoma with the Kitsap Peninsula and carry State Route 16 (known as Primary State Highway 14 until 1964) over the strait. Historically, the name "Tacoma Narrows Bridge" has applied to the original bridge nicknamed "Galloping Gertie", which opened in July 1940, but collapsed because of aeroelastic flutter four months later, as well as the replacement of the original bridge which opened in 1950 and still stands today as the westbound lanes of the present-day 2 bridge complex.

The original Tacoma Narrows Bridge opened on July 1, 1940. The original bridge received its nickname "Galloping Gertie" because of the vertical movement of the deck observed by construction workers during windy conditions. The bridge became known for its pitching deck, and collapsed into Puget Sound the morning of November 7, 1940, under high wind conditions. Engineering issues, as well as the United States' involvement in World War II, postponed plans to replace the bridge for several years; the replacement bridge was opened on October 14, 1950.

By 1990, population growth and development on the Kitsap Peninsula caused traffic on the bridge to exceed its design capacity; as a result, in 1998 Washington voters approved a measure to support building a parallel bridge. After a series of protests and court battles, construction began in 2002 and the new bridge opened to carry eastbound traffic on July 16, 2007, while the 1950 bridge was reconfigured to carry westbound traffic.

At the time of their construction, both the 1940 and 1950 bridges were the third-longest suspension bridges in the world in terms of main span length, behind the Golden Gate Bridge and George Washington Bridge. The 1950 and 2007 bridges are as of 2017 the fifth-longest suspension bridge spans in the United States and the 43rd-longest in the world.

Tolls were charged on the bridge for the entire four-month service life of the original span, as well as the first 15 years of the 1950 bridge. In 1965, the bridge's construction bonds plus interest were paid off, and the state ceased toll collection on the bridge. Over 40 years later, tolls were reinstated as part of the financing of the twin span, and are presently collected only from vehicles traveling eastbound. 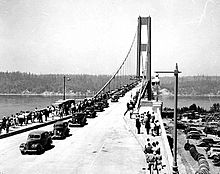 The desire for the construction of a bridge in this location dates back to 1889 with a Northern Pacific Railway proposal for a trestle, but concerted efforts began in the mid-1920s. In 1937, the Washington State legislature created the Washington State Toll Bridge Authority and appropriated $5,000 to study the request by Tacoma and Pierce County for a bridge over the Narrows. The bridge was designed by Leon Moisseiff.

The first Tacoma Narrows Bridge opened to traffic on July 1, 1940. Its main span collapsed into the Tacoma Narrows four months later on November 7, 1940, at 11:00 a.m. (Pacific time) as a result of aeroelastic flutter caused by a 42 mph (68 km/h) wind. The bridge collapse had lasting effects on science and engineering. In many undergraduate physics texts, the event is presented as an example of elementary forced resonance, with the wind providing an external periodic frequency that matched the natural structural frequency, even though the real cause of the bridge's failure was aeroelastic flutter, not resonance. A contributing factor was its solid sides, not allowing wind to pass through the bridge's deck. Thus, its design allowed the bridge to catch the wind and sway, which ultimately took it down. Its failure also boosted research in the field of bridge aerodynamics and aeroelastic, fields which have influenced the designs of all the world's great long-span bridges built since 1940.

No human lives were lost in the collapse of the bridge. The only fatality was a Cocker Spaniel named Tubby, who perished after he was abandoned in a car on the bridge by his owner, Leonard Coatsworth. Professor Frederick Burt Farquharson, an engineer from the University of Washington who had been involved in the design of the bridge, tried to rescue Tubby but was bitten by the terrified dog when he attempted to remove him. The collapse of the bridge was recorded on Kodachrome 16 mm film by Barney Elliott and Harbine Monroe, owners of The Camera Shop in Tacoma, and shows Farquharson leaving the bridge after trying to rescue Tubby and making observations in the middle of the bridge. The film was subsequently sold to Paramount Studios, who then duplicated the footage for newsreels in black-and-white and distributed the film worldwide to movie theaters. Castle Films also received distribution rights for 8 mm home video.

Elliott and Monroe's original films of the construction and collapse of the bridge were shot on 16 mm Kodachrome color film, but most copies in circulation are in black and white because newsreels of the day copied the film onto 35 mm black-and-white stock. There were also film speed discrepancies between Monroe and Elliot's footage, with Monroe filming his footage in 24 fps while Elliott had filmed his footage at 16 fps. As a result, most copies in circulation also show the bridge oscillating approximately 50% faster than real time, due to an assumption during conversion that the film was shot at 24 frames per second rather than the actual 16 fps. In 1998, The Tacoma Narrows Bridge Collapse was selected for preservation in the United States National Film Registry by the Library of Congress as being "culturally, historically, or aesthetically significant". This footage is commonly shown to engineering, architecture, and physics students as a means to teach about engineering disaster.

The dismantling of the towers and side spans – having survived the collapse of the main span, but being damaged beyond repair – began shortly after the collapse and continued into May 1943. The United States' participation in World War II, as well as engineering and finance issues, delayed plans to replace the bridge.

The current westbound bridge was designed and rebuilt with open trusses, stiffening struts and openings in the roadway to let wind through. It opened on October 14, 1950, and is 5,979 feet (1822 m) long – 40 feet (12 m) longer than the first bridge, Galloping Gertie. Local residents nicknamed the new bridge Sturdy Gertie, as the oscillations that plagued the previous design had been eliminated. This bridge along with its new parallel eastbound bridge is currently the fifth-longest suspension bridges in the United States.

The bridge was designed to handle 60,000 vehicles a day. It carried both westbound and eastbound traffic until the eastbound bridge opened on July 15, 2007.

In 1998, voters in several Washington counties approved an advisory measure to create a second Narrows span. Construction of the new span, which carries eastbound traffic parallel to the current bridge, began on October 4, 2002, and was completed in July 2007. The bridge was dedicated in honor of State Representative Ruth Fisher and State Senator Robert "Bob" Oke, a South Kitsap resident, one of the main proponents of building the second span across Puget Sound between the Kitsap Peninsula and Tacoma.

The Washington State Department of Transportation collects a toll before entering the eastbound span, at $5.00 for "Good to Go" account holders with in-vehicle transponders, $6.00 toll for cash/credit card customers, and $7 for those who choose Pay-By-Mail. The existing span had been free of tolls since 1965. The new bridge marks the first installation of the new Good To Go electronic toll collection system.

~300° panorama from the deck of the new Tacoma Narrows Bridge at sunset.

All content from Kiddle encyclopedia articles (including the article images and facts) can be freely used under Attribution-ShareAlike license, unless stated otherwise. Cite this article:
Tacoma Narrows Bridge Facts for Kids. Kiddle Encyclopedia.