King County is located in the U.S. state of Washington. The population was 2,269,675 in the 2020 census, making it the most populous county in Washington, and the 12th-most populous in the United States. The county seat is Seattle, also the state's most populous city.

King County is one of three Washington counties that are included in the Seattle–Tacoma–Bellevue metropolitan statistical area. (The others are Snohomish County to the north, and Pierce County to the south.) About two-thirds of King County's population lives in Seattle's suburbs.

The county was originally named after William Rufus King who was Vice President when the Washington Territory was created in 1853. In 1986, a motion was introduced to change the namesake to Martin Luther King Jr.

On February 24, 1986, the King County Council passed Council Motion 6461 five votes to four setting forth the historical basis for the renaming of King County in honor of Martin Luther King, Jr. Because only the state can charter counties, this change was not made official until April 19, 2005, when the Governor signed Senate Bill 5332 into law.

The County Council submitted a vote to the public on February 27, 2006 to change the county's logo from a royal crown to an image of King. On March 12, 2007, the new logo was unveiled.

The county was formed out of territory within Thurston County on December 22, 1852, by the Oregon Territory legislature, and was named after Alabama resident William R. King, who had just been elected Vice President of the United States under President Franklin Pierce. Seattle was made the county seat on January 11, 1853.

On February 24, 1986, the King County Council passed Motion 6461 renaming King County to commemorate the Rev. Dr. Martin Luther King, Jr. (1929-1968), the civil rights leader, rather than William Rufus de Vane King (1786-1853), the vice-president-elect for whom the county was named in 1852. The stated reason for the change was the revelation that "William Rufus DeVane King was a slaveowner and a "gentle slave monger" according to John Quincy Adams." 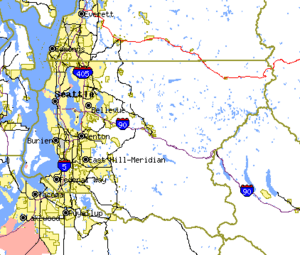 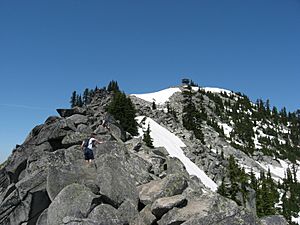 Racial and Ethnic Composition since 1960

King County is home two federally-recognized tribes, the Muckleshoot tribe and the Snoqualmie Indian Tribe tribe, and other unrecognized groups. The Muckleshoot Indian Reservation is located southeast of Auburn and is home to a resident population of 3,606 as of the 2000 census.

The Snoqualmie tribe's casino property was federally recognized as their reservation in 2006, however few tribe members live near the reservation.

All content from Kiddle encyclopedia articles (including the article images and facts) can be freely used under Attribution-ShareAlike license, unless stated otherwise. Cite this article:
King County, Washington Facts for Kids. Kiddle Encyclopedia.