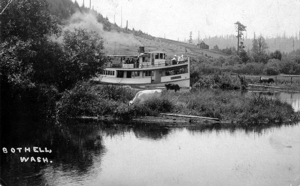 The May Blossom, a Lake Sammamish steamboat circa 1900.

Monohon was a small town located on the east side of Lake Sammamish (then known as Lake Squak), near the present-day intersection of East Lake Sammamish Parkway and SE 33rd Street in the city of Sammamish. The community was originally part of a town named Donnelly, founded by Simon Donelly who built a sawmill there, but then grew big enough and was far enough away from Donelly that they created their own town, Monohon in 1888. The new town was named after Martin Monohon who had homesteaded 160 acres (0.65 km2) there in 1877. The railroad along the east side of the lake was completed in 1889, and the Donnelly mill was moved to the site of Monohon.

By the turn of the century, there were twenty homes in Monohon, and the lumber mill was updated with the latest machinery. The mill also completed a new water system for the community. This brought both new wealth and new settlers to the community, which soon more than doubled in size. By 1911, the town's population had reached over 300. A 20-room hotel was built overlooking the lake, along with a church and a community meeting hall. The dock was used to ship lumber and dairy products on the lake. Growth slowed, but continued over the years.

During the height of the prohibition era, the small town was raided by King County sheriff officers looking for 'bootleggers'. 50 gallons of moonshine whiskey were reportedly confiscated.

In 1925, the entire town was destroyed by a fire. The sawmill, hotel, depot, post office, and all but about 10 homes were completely consumed. The mill was rebuilt, but the town never recovered, and all but disappeared when the great depression hit in 1929. The sawmill continued to operate for many years after, but was repeatedly burned and rebuilt. The mill finally closed forever in 1980.

All content from Kiddle encyclopedia articles (including the article images and facts) can be freely used under Attribution-ShareAlike license, unless stated otherwise. Cite this article:
Monohon, Washington Facts for Kids. Kiddle Encyclopedia.