Wellington (later known as Tye) was a small unincorporated community and railroad community on the Great Northern Railway in northeastern King County, Washington. Founded in 1893, it was located at the west portal of the original Cascade Tunnel under Stevens Pass. It is infamous for being the site of the March 1, 1910 Wellington avalanche, the worst avalanche in United States history, in which 96 people died.

After the disaster, the town's name was changed to Tye, after the nearby Tye River, because of the negative connotation of the original name.

Tye was abandoned in 1929 when the second Cascade Tunnel came into use. 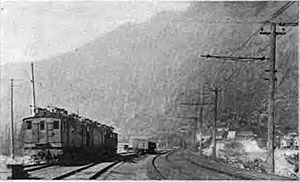 Wellington depot before the avalanche 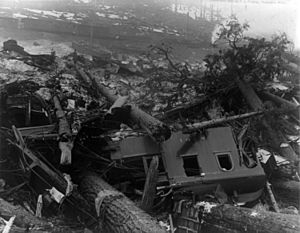 Train wreckage caused by the avalanche

The Wellington avalanche was the worst avalanche, measured in terms of lives lost, in the history of the United States.

For nine days at the end of February 1910, the little town of Wellington, Washington was assailed by a terrible blizzard. Wellington was a Great Northern Railway stop high in the Cascades, on the west side of the old Cascade Tunnel, under Stevens Pass. As much as a foot of snow fell every hour, and, on the worst day, 11 feet (340 cm) of snow fell. Two trains, a passenger train and a mail train, both bound from Spokane to Seattle, were trapped in the depot. Snow plows were present at Wellington and others were sent to help, but they could not penetrate the snow accumulations and repeated avalanches along the stretch of tracks between Scenic and Leavenworth.

Late on February 28, the snow stopped and was replaced by rain and a warm wind. Just after 1 a.m. on March 1, as a result of a lightning strike, a slab of snow broke loose from the side of Windy Mountain during a violent thunderstorm. A ten-foot high mass of snow, half a mile long and a quarter of a mile wide, fell toward the town. A forest fire had recently ravaged the slopes above the town, leaving very little to impede the avalanche.

The avalanche missed the Bailets Hotel (which also housed the town's general store and post office), but hit the railroad depot. Most of the passengers and crew were asleep aboard their trains. The impact threw the trains 150 feet downhill and into the Tye River valley. Ninety six people were killed, including 35 passengers, 58 Great Northern employees on the trains, and three railroad employees in the depot. Twenty-three passengers survived; they were pulled from the wreckage by railroad employees who immediately rushed from the hotel and other buildings where they had been staying. The work was soon abandoned; it was not until 21 weeks later, during late July, that it was possible for the last of the bodies to be retrieved. This was not the only avalanche in the region that winter. Three days later, 63 railroad workers were killed in an avalanche nearby in British Columbia.

Wellington was quietly renamed Tye during October 1910 because of the unpleasant associations of the old name. In the same month, the Great Northern Railway began construction of concrete snow sheds to shelter the nearby tracks. The Wellington depot was closed when the second Cascade Tunnel was completed during 1929. The town was then abandoned and it eventually burned. However, the old track and snow sheds are still there and have been preserved as part of the Iron Goat Trail, which is accessible easily from U.S. Highway 2 near Stevens Pass or near Scenic, east of Everett.

All content from Kiddle encyclopedia articles (including the article images and facts) can be freely used under Attribution-ShareAlike license, unless stated otherwise. Cite this article:
Wellington, Washington Facts for Kids. Kiddle Encyclopedia.