Stevens Pass (elevation 4,061 ft (1,238 m)) is a mountain pass through the Cascade Mountains located at the border of King County and Chelan County in Washington, United States. U.S. Route 2 travels over the pass, reaching a maximum elevation of 4,061 feet (1,238 m). The Pacific Crest Trail crosses the highway at Stevens Pass. The BNSF Railway's Cascade Tunnel lies 1,180 feet (400 m) below the pass summit.

The pass is near Stevens Pass Ski Area, which is on Cowboy Mountain and Big Chief Mountain.

Stevens Pass is named after John Frank Stevens, the first non-indigenous person to discover it. Native Americans familiar with the area knew of the pass, although very little is known about Native American routes through the mountains. In 1872 Hubert C. Ward, who was exploring the area for the Northern Pacific Railway, heard from some Native Americans that there was a low pass at the head of Nason Creek, a tributary of the Wenatchee River, which led to one of the sources of the Skykomish River. Later, in 1887 Albert Bowman Rogers who, like Stevens, was working for the Great Northern Railway learned from Native Americans that the Skykomish River and Nason Creek had sources close to one another but that neither Native Americans nor whites visited the Nason Creek area. Neither Ward nor Rogers had time to fully explore the area. In 1890 John Stevens conducted a thorough survey, located the pass, and determined it to be the best suited for a railway crossing of the North Cascades. He wrote that there was no indication that the pass was used — there was no sign of any trails, blazes, campsites, or old campfires, for at least ten miles in either direction and that the area was thickly forested and covered with almost impenetrable brush. Steven wrote, "the region promised nothing to the prospector, while Indians and Whites crossing the mountains used either Snoqualmie on the south or the Indian Pass on the north." 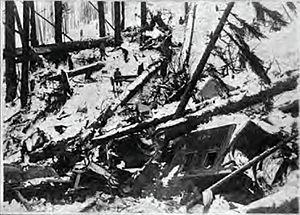 Debris — including wrecked train cars — resulting from the Wellington Avalanche.

On February 23, 1910, the two Great Northern Railway trains, the "Seattle Express" local passenger train No. 25 and Fast Mail train No. 27, were stalled on the tracks at the Cascade Tunnel Station on Stevens Pass because of a heavy snow storm and avalanches. Then on March 1, six days later, another avalanche pushed both trains 150 feet (46 m) down into the Tye River Valley, thus burying the train cars in snow and debris. The Wellington Disaster killed ninety-six people – thirty-five passengers and sixty-one railroad employees – which made the Wellington avalanche one of the worst train disasters in United States history.

All content from Kiddle encyclopedia articles (including the article images and facts) can be freely used under Attribution-ShareAlike license, unless stated otherwise. Cite this article:
Stevens Pass Facts for Kids. Kiddle Encyclopedia.