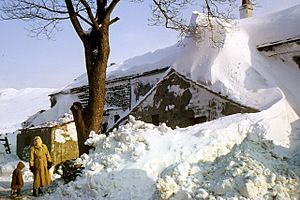 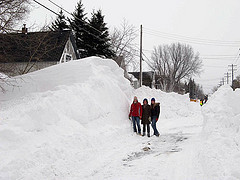 A blizzard is a severe snowstorm. It brings low temperatures, strong winds, and a lot of blowing snow. Blizzards start when a high pressure system touches as low pressure system.

The word blizzard is sometimes used incorrectly by news media to talk about big winter storms, even if the storm is not a blizzard.

The difference between a blizzard and a snowstorm is the strength of the wind, not the amount of snow. To be a blizzard, a snow storm must have sustained winds or frequent gusts that are greater than or equal to 56 km/h (35 mph) with blowing or drifting snow which reduces visibility to 400 m or 0.25 mi or less and must last for a prolonged period of time—typically three hours or more.

Some areas are more likely to be hit by blizzards than others, but a blizzard can occur in any place where snow falls. In North America, blizzards happen often in the northern-east states, and in the provinces of Canada. In this region, blizzards can happen more than twice each winter.

They also occur often in the mountain ranges of western North America. Because these regions have low populations, blizzards sometimes are not reported.

A very dangerous type of blizzard is a whiteout. In a whiteout, downdrafts and snowfall are so thick that people cannot tell the ground and sky apart. People caught in a whiteout lose their sense of direction very fast. This is a large danger to pilots when they are flying airplanes, because they cannot tell how close they are to the ground, and may crash.

Who cleans up after blizzards?

The community cleans up after a snowstorm/blizzard occurs. Blizzards only usually go for 3 hours so everything won't be too damaged, meaning it won't be as hard as an earthquake or tsunami to clean.

How deep the snow gets

These horrible blizzards can achieve up to 25-30 feet deep. A basketball hoop is 10 ft high, so a blizzard can get snow as deep as the height of two or three hoops.

How do blizzards occur?

Firstly you need cold enough air to cause snow to fall in the clouds and ground level water and moisture is needed to form clouds and precipitation. The moisture is called water vapour to make the clouds a source of water vapour is cold air blowing across large lakes or the sea but the cold air doesn't actually make too much snow, its a combination of cold and warm air that does it. The warm air normally meets the cold air if the wind is being pulled towards the equator when they are brought together a front is formed and precipitation is formed and the warm air can go up to the clouds and the blizzard forms from there.

How strong are a blizzard's winds?

There is sustained wind or frequent gusts of 35 miles per hour or greater.

How cold can blizzards get?

Blizzards can get down to -12 degrees or lower. This makes it fairly easy to get hypothermia in a blizzard. Mostly freezing electrics and machinery making life very hard in the Hypothermic temperatures. 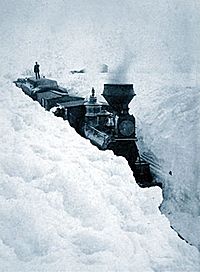 Blizzards that appear quickly cause a lot of damage. They can bury cars, trucks, and even a locomotive under snow.

The Great Blizzard of 1888 was very damaging for the Northeastern United States. In that blizzard, 400 people died, 200 ships sunk, and snowdrifts were 10 or 15 feet high. In the Great Plains, states were hit by the Schoolhouse Blizzard that trapped children in schools and killed 235 people.

In 1880–1881 there was a winter that people in the Dakotas called the "Hard Winter". The author Laura Ingalls Wilder wrote her book The Long Winter about that winter's story. It talks about one blizzard after another, and how it changed Laura's family and everybody around her. The book is almost all true. Her story of two men from the town of DeSmet, South Dakota, going after some wheat stored some miles south of DeSmet in February 1881 is true, and Ingalls later married one of the men, Almanzo Wilder. If the two men had not found and brought back the wheat, the people would have starved. The snow and ice thawed in April, and the railroads could start again. The train picture above was photographed on March 29, 1881, not far from DeSmet.

34 people died during a 3-day spring blizzard on March 1920 in North Dakota. One of the people who died was Hazel Miner, a teenage girl who died of freezing to death when she got lost on her way home from her one-room-school.

105 years after the Great Blizzard of 1888, a giant blizzard, named the Storm of the Century, hit the U.S in 1993. It dropped snow on 26 states and reached as far north as Canada and as far south as Mexico. In many southern U.S. areas, such as parts of Alabama, more snow fell in this storm than ever fell in an entire winter. Highways and airports closed across the U.S. The blizzard also made 15 tornadoes in Florida. When the storm was over, 270 people died and 48 were reported missing.

Snowdrifts made driving hard in the 1977 blizzard in Buffalo, New York

All content from Kiddle encyclopedia articles (including the article images and facts) can be freely used under Attribution-ShareAlike license, unless stated otherwise. Cite this article:
Blizzard Facts for Kids. Kiddle Encyclopedia.