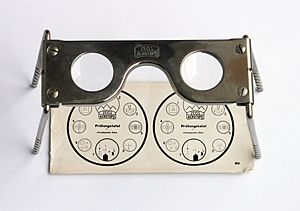 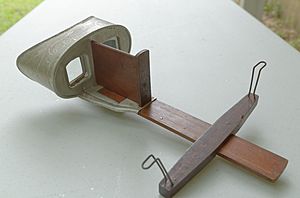 A stereoscope is a device for viewing a stereoscopic pair of separate images, depicting left-eye and right-eye views of the same scene, as a single three-dimensional image.

A typical stereoscope provides each eye with a lens that makes the image seen through it appear larger and more distant and usually also shifts its apparent horizontal position, so that for a person with normal binocular depth perception the edges of the two images seemingly fuse into one "stereo window". In current practice, the images are prepared so that the scene appears to be beyond this virtual window, through which objects are sometimes allowed to protrude, but this was not always the custom. A divider or other view-limiting feature is usually provided to prevent each eye from being distracted by also seeing the image intended for the other eye.

Most people can, with practice and some effort, view stereoscopic image pairs in 3D without the aid of a stereoscope, but the physiological depth cues resulting from the unnatural combination of eye convergence and focus required will be unlike those experienced when actually viewing the scene in reality, making an accurate simulation of the natural viewing experience impossible and tending to cause eye strain and fatigue.

Although more recent devices such as Realist-format 3D slide viewers and the View-Master are also stereoscopes, the word is now most commonly associated with viewers designed for the standard-format stereo cards that enjoyed several waves of popularity from the 1850s to the 1930s as a home entertainment medium.

Devices such as polarized, anaglyph and shutter glasses which are used to view two actually superimposed or intermingled images, rather than two physically separate images, are not categorized as stereoscopes.

A simple stereoscope is limited in the size of the image that may be used. A more complex stereoscope uses a pair of horizontal periscope-like devices, allowing the use of larger images that can present more detailed information in a wider field of view. The stereoscope is essentially an instrument in which two photographs of the same object, taken from slightly different angles, are simultaneously presented, one to each eye. This recreates the way which in natural vision, each eye is seeing the object from a slightly different angle, since they are separated by several inches, which is what gives humans natural depth perception. Each picture is focused by a separate lens, and by showing each eye a photograph taken several inches apart from each other and focused on the same point, it recreates the natural effect of seeing things in three dimensions.

A moving image extension of the stereoscope has a large vertically mounted drum containing a wheel upon which are mounted a series of stereographic cards which form a moving picture. The cards are restrained by a gate and when sufficient force is available to bend the card it slips past the gate and into view, obscuring the preceding picture. These coin-enabled devices were found in arcades in the late 19th and early 20th century and were operated by the viewer using a hand crank. These devices can still be seen and operated in some museums specializing in arcade equipment.

A stereo transparency viewer is a type of stereoscope that offers similar advantages, e.g. the View-Master.

Disadvantages of stereo cards, slides or any other hard copy or print are that the two images are likely to receive differing wear, scratches and other decay. This results in stereo artifacts when the images are viewed. These artifacts compete in the mind resulting in a distraction from the 3D effect, eye strain and headaches.

All content from Kiddle encyclopedia articles (including the article images and facts) can be freely used under Attribution-ShareAlike license, unless stated otherwise. Cite this article:
Stereoscope Facts for Kids. Kiddle Encyclopedia.