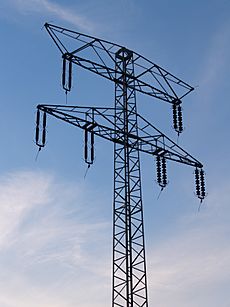 Electricity pylon that carries electricity. If these fail, there may be a power cut.

A power cut, sometimes called a power outage or blackout, is a word for when the electric power does not work in an area. It is sometimes caused by a power line (or electricity cable) falling down, but may also happen due to routine maintenance. In poor countries, such as many in Africa, there are regular power cuts as more people try to use the electricity than there is to go around. An uninterruptible power supply can protect sensitive equipment such as computers or other electronics during a power cut, allowing it to be properly shut down.

All content from Kiddle encyclopedia articles (including the article images and facts) can be freely used under Attribution-ShareAlike license, unless stated otherwise. Cite this article:
Power cut Facts for Kids. Kiddle Encyclopedia.