Kids Encyclopedia Facts
Not to be confused with North Bend, Oregon.

North Bend is a city in King County, Washington, United States, on the outskirts of the Seattle metropolitan area. The population was 5,731 at the 2010 census and an estimated 7,136 in 2018.

Since the closure of Weyerhaeuser's Snoqualmie sawmill, North Bend has become a prosperous bedroom community for Seattle, which is located about 30 miles (48 km) to the west. The town was made famous by David Lynch's television series Twin Peaks, which was partially filmed in North Bend. The community is also home to Nintendo North Bend, the main North American production facility and distribution center for the video game console manufacturer Nintendo. 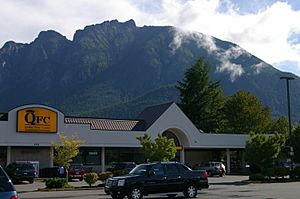 The Native Americans who inhabited the Snoqualmie Valley, led by Chief Patkanim, sided with settlers in the wars of the 1850s and, with the Treaty of Point Elliott, lost such title as settlers acknowledged. Some of the soldiers in those wars, such as the brothers and sisters Kellogg, established cabins near their blockhouses; however the first permanent settler in the valley was Jeremiah Borst, in 1858.

In 1865, Matts Peterson homesteaded the site that ultimately became North Bend. Deeply in debt, he sold the property to Borst and moved east of the mountains. Borst wrote to Will Taylor, who had left the area to go mining in California, and offered him the Peterson place in exchange for labor. Taylor returned and prospered as a farmer and operator of a trading post. He platted North Bend as Snoqualmie but because another nearby town had the same name, renamed it Mountain View. However, the Post Office Department objected to the name Mountain View, so it was renamed North Bend after its location near the north bend of the South Fork of the Snoqualmie River. North Bend was officially incorporated on March 12, 1909.

North Bend is located in the foothills of the Cascade Range just 31 miles (50 km) east of Seattle in the upper valley of the Snoqualmie River. The nearest town, Snoqualmie, Washington, is located about 3 miles (4.8 km) to the northwest. Both towns lie near the center of the Mountains to Sound Greenway. The most prominent geological feature nearby, Mount Si looms over the town. To the south is Rattlesnake Ridge. Mount Si stands at 4,167 feet (1,270 m) and towers above the town, itself at around 440 ft (130 m). A 4-mile (6.4 km) trail zig zags up to the summit with a vertical climb of 3,500 feet (1,100 m).

There were 2,210 households, of which 39.0% had children under the age of 18 living with them, 52.9% were married couples living together, 10.0% had a female householder with no husband present, 4.4% had a male householder with no wife present, and 32.7% were non-families. 24.8% of all households were made up of individuals, and 9% had someone living alone who was 65 years of age or older. The average household size was 2.57 and the average family size was 3.10.

The McGrath Hotel is located on the site of the cabin of William Henry Taylor, who platted North Bend in 1889. In October 1921, Jack McGrath and his wife Caroline purchased the site of their future venture, McGrath's Café; construction was completed as a one story restaurant in 1922. In early 1926 the building was expanded two window bays westward, creating the hotel lobby (now the restaurant bar) and a second story was added to the entire structure to accommodate the hotel rooms of the new McGrath Hotel. After several years of deferred maintenance, the McGrath was purchased in 2000 by a local couple who spent two years rehabilitating the building. It is now listed on the National Register of Historic Places. The first floor currently houses a popular Brew Pub, Brickyard Brewing.

On April 9, 1941 the North Bend Theatre opened its doors. It has continued operating as an independent movie theater since that day. In 1999, the theatre underwent a major renovation to make it more modern. In 2013, the theater was once more saved from extinction by a successful $100,000+ fundraiser to convert the theater from 35mm cellulose to 4K digital video. During this series of renovations every part of the building was improved without sacrificing the distinctive character of this 1941 Art Deco theater. 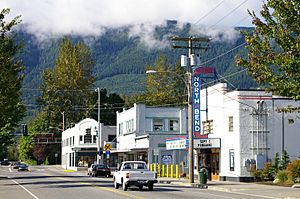 Valley Center Stage is a community theater that promotes the performing arts in all its aspects. The theater has regular shows featuring classics and comedy. In addition, the theater offers opportunities to valley residents to participate in the theater's productions.

North Bend is located 30 miles (48 km) east of Seattle on Interstate 90 freeway, which runs from Seattle to Boston. There is regular bus service provided by King County Metro Transit on route 208. Metro buses are outfitted with bike racks. There are a number of van pools to Redmond, Bellevue, Seattle, and Renton. Snoqualmie Valley Transportation provides door-to-door transportation for the public in North Bend, Snoqualmie, Preston, Fall City, Carnation, Duvall and Monroe.

North Bend has a fairly modest trail system. The Snoqualmie Valley Regional Trail stretches from Duvall, WA through Carnation, WA, Fall City, WA, Snoqualmie, WA, through North Bend, WA to Rattlesnake Lake. This 31.5-mile (50.7 km) trail connects to the John Wayne Pioneer Trail (which goes clear across Washington to the Idaho border) and to the City of Snoqualmie's extensive trail network. North Bend also has its own city trail system in downtown, the Si View neighborhood and along the South Fork of the Snoqualmie River in several places.

King County and the City of North Bend have designated the following landmarks:

All content from Kiddle encyclopedia articles (including the article images and facts) can be freely used under Attribution-ShareAlike license, unless stated otherwise. Cite this article:
North Bend, Washington Facts for Kids. Kiddle Encyclopedia.