Kids Encyclopedia Facts
Not to be confused with Bellevue (Washington, D.C.).

Bellevue ( BEL-vew) is a city in the Eastside region of King County, Washington, United States, across Lake Washington from Seattle. As the third-largest city in the Seattle metropolitan area, Bellevue has variously been characterized as an edge city, a boomburb, or satellite city. The city had a population of 122,363 at the 2010 census.

Prior to 2008, downtown Bellevue underwent rapid change, with many high rise projects under construction, and was relatively unaffected by the economic downturn. The downtown area is currently the second largest city center in Washington state with 1,300 businesses, 45,000 employees and 10,200 residents. Based on per capita income, Bellevue is the 6th wealthiest of 522 communities in the state of Washington. In 2008, Bellevue was named number 1 in CNNMoney's list of the best places to live and launch a business, In 2014, Bellevue was ranked as the 2nd best place to live by USA Today. More than 145 companies have located in Bellevue, big names such as Expedia, T-Mobile, Microsoft and Nintendo have all been based here.

The name "Bellevue" is French for "beautiful view".

Bellevue was settled in 1869 by William Meydenbauer and Aaron Mercer, who claimed homestead tracts several miles apart. Prior to the opening of the Lake Washington Floating Bridge in 1940, Bellevue was a rural area with little development. Although it was small, developers were pushing to change that; in the 1920s, James S. Ditty predicted that it would become a city with a population of 200,000. He envisioned plans that included the bridging of Lake Washington and an area filled with golf courses and airports. His map with these visions was published in 1928.

Once the Murrow Memorial Bridge opened, access from Seattle improved, and the area gradually grew into a bedroom community. After the Japanese Internment began in 1942 a large quantity of farm land was available for development. This made way for the initial development of the Bellevue downtown area. 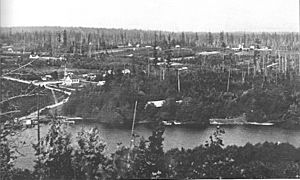 Bellevue seen from Meydenbauer Bay in 1902

Bellevue incorporated as a third class city on March 21, 1953. Following the 1963 opening of a second bridge across the lake, the Evergreen Point Floating Bridge, the city began to grow more rapidly. It has since become one of the largest cities in the state, with several high-rise structures in its core and a burgeoning business community. The city experienced a building boom during the mid 2000s, with the building of developments such as Lincoln Square and the Bravern.

Reflective of Bellevue's growth over the years is Bellevue Square, now one of the largest shopping centers in the region. Opened in 1946, the mall underwent a significant expansion in the 1980s. More recently, an expansion along Bellevue Way called "The Lodge" and the new One Lincoln Tower promise to strengthen downtown Bellevue's role as the largest Seattle Eastside shopping and dining destination.

The city's long-term plans include the Bel-Red Corridor Project, a large-scale planning effort to encourage the redevelopment of a large northern section of the city bordering the adjacent town of Redmond which is a major employment area in the city. Patterned after what many civic leaders consider the successful redevelopment of the downtown core, early plans include "superblock" mixed use projects similar to Lincoln Square. Premised on the 2008 approval of the extension of Link Light Rail to the Eastside, the city hopes to mitigate transportation problems impeding earlier efforts in redeveloping the downtown core; viewed as an economic development opportunity by many in the business and building development community, the process has focused on infrastructure and the encouragement of private construction in a large-scale urban renewal effort.

The city's name is derived from a French term for "beautiful view". Under favorable weather conditions, scenic vistas of the Olympic Mountains and Cascade Mountains can be viewed from hilltops (and strategically positioned high-rise buildings) within the incorporated city.

The city lies between Lake Washington to the west and the smaller Lake Sammamish to the east. Much of Bellevue is drained by the Kelsey Creek watershed, whose source is located in the Larsen and Phantom Lake green belt and whose outlet is near where Interstate 90 meets Lake Washington's eastern shore. The city is bisected by Interstate 405 running north-south, and the southern portion is crossed from west to east by Interstate 90. The State Route 520 freeway roughly delineates the upper reaches of Bellevue.

South of I-90, the city continues up Cougar Mountain, at the top of which lies is an unincorporated King County location called Hilltop. To the west of Cougar Mountain, Bellevue includes the Coal Creek, Somerset, and Factoria neighborhoods.

Bellevue is bordered by the cities of Kirkland to the north and Redmond to the northeast along the Overlake and Crossroads neighborhoods. Across the short East Channel Bridge, I-90 connects Bellevue to Mercer Island to the southwest. Issaquah is to the east, down I-90 at the south end of Lake Sammamish. The city is also bordered to the west by many affluent suburbs such as Medina, Clyde Hill, Hunts Point and Yarrow Point. The south end of Bellevue is bordered by the city of Renton, and to the southeast, the relatively recently incorporated city of Newcastle.

Like much of the Puget Sound lowland, Bellevue has a mild oceanic climate. It also has frequent rain showers from October to May, with precipitation levels typically being over 2 inches. On average, the hottest month is July, while January is the coldest. 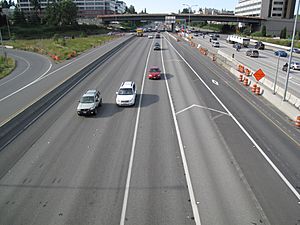 I-405 as seen from the NE 8th Street Overpass

Bellevue is the main Eastside hub for both the local transit authority, King County Metro, and Sound Transit, the regional transit system. The Bellevue Transit Center, which serves both Metro and Sound buses, is located in the heart of the downtown business district and is connected to Interstate 405 by NE 6th St. and a direct-access Texas T HOV ramp. Local buses run into Kirkland, Redmond, Issaquah, Renton, and the University District; regional buses go to Bothell, Lynnwood, Everett, Seattle, Renton, Kent and Auburn, among other cities.

The East Link light rail line is planned to run from Seattle through Mercer Island and Bellevue before ending in Redmond. A measure including this and other regional road and transit projects went before voters on November 4, 2008 and was approved.

The Bellevue City Council lobbied hard for Sound Transit—a regional transit authority—to construct its light-rail line underground through Bellevue's rapidly growing downtown. Bellevue promised to devote between $104 million to $150 million toward a potential tunnel in the form of cash, services, free access to rights-of-way and one-time tax revenues that result from the East Link project. In November 2011, the council signed an agreement with Sound Transit. Tunnel construction is scheduled to begin in early 2016 while the remainder of downtown Bellevue construction will begin in mid-2017. Bellevue City Council member Claudia Balducci is a member of the Sound Transit board of directors.

The City of Bellevue has undertaken an extensive "Bel-Red Area Transformation" process which seeks to plan some 900 acres (3.6 km2) in the northern portion of the city, all of which is premised on the extension of light rail to the Eastside under Sound Transit 2. The top-down and highly integrated land use and transportation planning is similar to earlier planning for the Downtown.

Bellevue was also served by a railroad, a Burlington Northern branch line known as the Woodinville Subdivision, which included the historic Wilburton Trestle. This local freight line was the subject of debate over whether to railbank the line and construct a multi-purpose trail. As of March 2009, the Port of Seattle had to postpone its acquisition of the corridor because of instability in the bond market. As of 2016 the line is disused however part of the track bed at Wilberton Station will be reused by Sound Transit's light-rail construction.

The city once had an operating air-field named Bellevue Airfield.

In 2006, Bellevue was rated one of the 25 safest cities in America, based on the per-capita incidence of violent crime.

There were 50,355 households of which 30.0% had children under the age of 18 living with them, 52.9% were married couples living together, 7.6% had a female householder with no husband present, 3.3% had a male householder with no wife present, and 36.2% were non-families. 28.1% of all households were made up of individuals and 8.4% had someone living alone who was 65 years of age or older. The average household size was 2.41 and the average family size was 2.97.

There were 45,836 households out of which 27.5% had children under the age of 18 living with them, 53.0% were married couples living together, 7.5% had a female householder with no husband present, and 36.6% were non-families. 28.4% of all households were made up of individuals and 7.9% had someone living alone who was 65 years of age or older. The average household size was 2.37 and the average family size was 2.93.

Bellevue is the site of the popular annual Bellevue Arts and Crafts Fair (originally Pacific Northwest Arts and Crafts Fair), held since 1947 at the end of July. The biennial Bellevue Sculpture Exhibition draws thousands of visitors to the Downtown Park to view up to 46 three-dimensional artworks from artists around the country. The Bellevue 24-Hour Relay has also been hosted every July in Bellevue Downtown Park. In celebration of its strawberry farming history, Bellevue holds an annual Strawberry Festival on the fourth weekend in June. The festival initially began in 1925, and continued to 1942 when many Bellevue's strawberry farmers were incarcerated as part of the Japanese Internment. In 1987 the festival was resumed as a one evening event, and in 2003 it was expanded back to a multi-day festival. 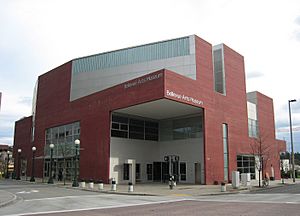 The Bellevue Arts Museum first opened in 1975, then moved to Bellevue Square in 1983. In 2001, the museum moved into its own building, designed by Steven Holl. The museum subsequently ran into financial difficulties and was forced to close to the public in 2003. After a lengthy fundraising campaign, a remodel, and a new mission to become a national center for the fine art of craft and design, the museum reopened on June 18, 2005 with an exhibition of teapots. The Rosalie Whyel Museum of Doll Art - now closed - contained one of the largest doll collections in the world—more than a thousand dolls—displayed on two floors of a Victorian-style building. The KidsQuest Children's Museum is located in Marketplace @ Factoria. The museum's primary visitors are mothers and care givers with children from pre-crawlers to 12 years of age. Its 10,000-square-foot (930 m2) space houses play and discovery areas, exhibits, offices, educational activities and classroom space. Near Interstate 405 is Meydenbauer Center, a convention center that brings corporate meetings and charity events to the downtown area. Meydenbauer also includes a 410-seat theater which attracts operas, ballets, and orchestral performances.

Since the 1970s, the city has taken an active role in ensuring that its commercial development does not overwhelm its natural land and water resources. Today, the Bellevue Parks and Community Services Department manages more than 2,500 acres (10 km2) of parks and open spaces, including the Downtown Park and the Bellevue Botanical Garden, as well as several playgrounds, beach parks, and trails. More than 5,500 Bellevue residents participate in volunteer activities through this department annually.

Bellevue was home to the American Basketball Association team, the Bellevue Blackhawks. The Blackhawks in 2005, despite being ranked 13th in the league, made it to the championship game in front of 15,000 fans in Little Rock, Arkansas. The team has been inactive since 2006.

Bellevue has the following sister cities:

All content from Kiddle encyclopedia articles (including the article images and facts) can be freely used under Attribution-ShareAlike license, unless stated otherwise. Cite this article:
Bellevue, Washington Facts for Kids. Kiddle Encyclopedia.