Kids Encyclopedia Facts
This page is about the guitarist of Heart. For the jazz vocalist, see Nancy Wilson (jazz singer). 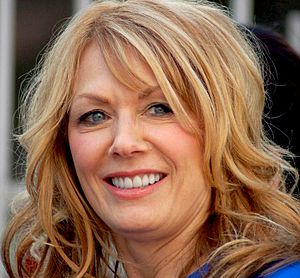 Nancy Lamoureaux Wilson (born March 16, 1954) is an American musician and singer. She is best known as a guitarist and backing vocalist for the rock band Heart. Her older sister, Ann Wilson, is Heart's lead singer. As a member of Heart, Wilson was added to the Rock and Roll Hall of Fame in 2013.

Wilson was born in San Francisco, California. Her family later settled in Bellevue, Washington. She has two children with her first husband Cameron Crowe. She is now married to Geoff Bywater.

All content from Kiddle encyclopedia articles (including the article images and facts) can be freely used under Attribution-ShareAlike license, unless stated otherwise. Cite this article:
Nancy Wilson (rock musician) Facts for Kids. Kiddle Encyclopedia.