Vashon is a census-designated place (CDP) in King County, Washington, United States. It covers an island alternately called Vashon Island or Vashon-Maury Island, the largest island in Puget Sound south of Admiralty Inlet. The population was 10,624 at the 2010 census and the size is 37 square miles (96 km2). There are no bridges to connect the island with the mainland, a big factor contributing to the island's relative isolation and rural character.

The island was named on May 28, 1792, by the explorer George Vancouver after his friend James Vashon of the Royal Navy. Starting in 1824, different explorer and settler groups stayed on Vashon Island. The first logging on the island began in 1852. By 1855–1856, the S'Homamish people were interned at Fox Island. European-Americans settled Vashon Island between 1865 and 1890. During that time the main economies on the island were fishing and logging.

In 1890, Vashon Islanders started growing strawberries for sale. This became an important part of the Island economy during the next fifty years. In 1892, Vashon College opened in the Burton neighborhood on Vashon. During its operation, it was one of the leading colleges in the area. It later burned down in 1910.

At that time, Vashon Island was separate from the neighboring Maury Island, but today the hamlet of Portage sits on an isthmus built in 1916 by local homeowners that connects the two.

According to the United States Census Bureau, the CDP has a total area of 37.0 square miles (96 square kilometres).

To the west Vashon Island is separated from the Kitsap Peninsula by the Colvos Passage. The Dalco Passage separates Vashon Island from Tacoma to the south.

This region experiences warm (but not hot) and dry summers, with no average monthly temperatures above 71.6 °F (22.0 °C). According to the Köppen Climate Classification system, Vashon has a warm-summer Mediterranean climate, abbreviated "Csb" on climate maps.

There were 4,193 households out of which 30.9% had children under the age of 18 living with them, 56.2% were married couples living together, 7.9% had a female householder with no husband present, and 32.3% were non-families. 23.8% of all households were made up of individuals and 8.0% had someone living alone who was 65 years of age or older. The average household size was 2.40 and the average family size was 2.86.

Based on per capita income, Vashon ranks 32nd of 522 areas in the state of Washington to be ranked. 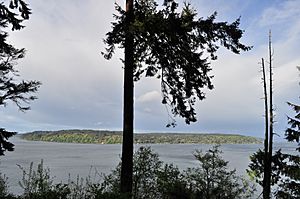 Water Taxi service between the northern terminus and downtown Seattle for passengers only is provided by King County with three sailings in each direction during both the morning and afternoon, Monday through Friday.

Vashon Municipal Airport is on the northern half of the island. There is no regularly scheduled air service to the airport. 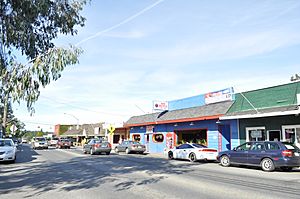 All content from Kiddle encyclopedia articles (including the article images and facts) can be freely used under Attribution-ShareAlike license, unless stated otherwise. Cite this article:
Vashon, Washington Facts for Kids. Kiddle Encyclopedia.