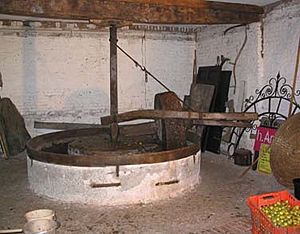 Quern for making perry and cider at Hellens, Herefordshire, where a large orchard was planted to commemorate the coronation of Queen Anne; avenues of perry pears from it still survive. The varieties Hellens Early and Hellens Green were named after the house.

Perry or pear cider is an alcoholic drink that is made from pear juice. Its alcohol content is around 5 to 8 percent.

Perry may contain high amount of sugar, while cider does not.

Perry is made in many countries. The countries that produce the most perry are the United Kingdom, France, and Spain.

All content from Kiddle encyclopedia articles (including the article images and facts) can be freely used under Attribution-ShareAlike license, unless stated otherwise. Cite this article:
Perry Facts for Kids. Kiddle Encyclopedia.