Southworth is an unincorporated community on Puget Sound in Kitsap County, Washington, United States. It is best known for being the west end of the Fauntleroy-Vashon Island-Southworth Washington State Ferries run. Landmarks include Southworth Grocery, a US Post Office, ferry terminal, clay cliffs and a private beach on the point. Next to the ferry is also a popular place to launch kayaks for trips to nearby Blake Island. The population was 2,185 at the 2010 census. 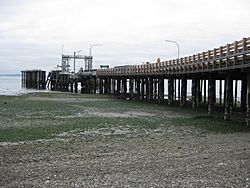 All content from Kiddle encyclopedia articles (including the article images and facts) can be freely used under Attribution-ShareAlike license, unless stated otherwise. Cite this article:
Southworth, Washington Facts for Kids. Kiddle Encyclopedia.