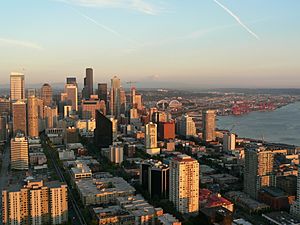 Downtown Seattle, from the top of the Space Needle, circa 2005 (looking south). Beyond Downtown is the Industrial District. 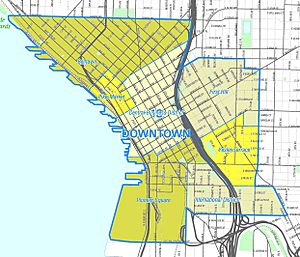 Map of Downtown Seattle and other central neighborhoods

Downtown is the central business district of Seattle, Washington. It is fairly compact compared with other city centers on the West Coast of the United States because of its geographical situation. It is hemmed in on the north and east by hills, on the west by Elliott Bay, and on the south by reclaimed land that was once tidal flats. It is bounded on the north by Denny Way, beyond which are Lower Queen Anne (sometimes known as "Uptown"), Seattle Center, and South Lake Union; on the east by Broadway Avenue, beyond which is Capitol Hill to the northeast and the Central District to the east; on the south by Dearborn Avenue, beyond which is Sodo; and on the west by Elliott Bay, which is part of Puget Sound (an inlet of the Pacific Ocean).

Belltown, Denny Triangle, the retail district, the West Edge, the financial district, the government district, Pioneer Square, Chinatown, Japantown, Little Saigon, and the western flank of First Hill west of Broadway consist of downtown Seattle's chief neighbourhoods. Near the center of downtown is the Metropolitan Tract, owned by the University of Washington, the location of the university's pre-1895 campus. Downtown is Seattle's finance hub, its commercial maritime hub, its center of nightlife, and its center of shopping. (The downtown shopping mall Westlake Center is connected to Seattle Center by way of a monorail).

Downtown Seattle's Columbia Center has a greater number of floors than any other building west of the Mississippi River, at 76, though there are taller buildings in Texas and California by height. (Smith Tower, in the older section of downtown called Pioneer Square, once held the title of tallest American building west of the Mississippi.) Other notable buildings are the Washington Mutual Tower, Two Union Square, Nordstrom’s flagship store, Benaroya Hall, the Seattle Central Library designed by Rem Koolhaas, and the main building of the Seattle Art Museum (built 1991, expanded 2007), the main facade of which was designed by Robert Venturi. Downtown parks include Westlake Park, Freeway Park, and Victor Steinbrueck Park. The Olympic Sculpture Park was completed on the Belltown waterfront in January 2007.

The area is also home to the landmark Pike Place Market, the oldest continually-operating farmer's market in the United States and the core of activity in the area.

After abandoning 'New York Alki', the Denny Party moved across the then named Duwamish Bay in April 1852 to a low level marsh situated with a safe deep water harbor roughly located in the city's Pioneer Square district where they named their new frontier 'Duwamps'. In the late 1850s, present day Downtown Seattle became the main residential outskirts of the city. But after the Great Seattle Fire, the business district was moved here. Because of the fire the city had to be built at a much higher elevation to avoid past drainage problems and regraded some of the city's hills starting somewhere around 1876. Since that time the area had been filled with newly established jobs. Seattle became an industrial hub in 1897 when the Klondike Gold Rush made the city a gateway for discovering gold. Starting in the late 1960s, Downtown has been being filled with dozens of skyscrapers and most famously for changing the Seattle skyline, the Columbia Center in 1985.

With about 65,000 now living in Seattle's core neighborhoods (in 2015), Downtown Seattle's population is growing. Downtown saw a 10 percent increase in the number of occupied housing units and an 8 percent increase in population between 2010 and 2014, outpacing growth in the city as a whole. As of the end of 2014, there were 32 apartment and 2 condominium projects under construction, representing over 5,000 units.

In 1989, building heights in Downtown and adjoining Seattle suburbs were tightly restricted following a voter initiative. These restrictions were dramatically loosened in 2006, leading to the increase in Downtown high-rise construction. This policy change has divided commentators between those who support the increased density and those who criticize it as "Manhattanization."

All content from Kiddle encyclopedia articles (including the article images and facts) can be freely used under Attribution-ShareAlike license, unless stated otherwise. Cite this article:
Downtown Seattle Facts for Kids. Kiddle Encyclopedia.