Lower Queen Anne (officially known since 2021 as Uptown) is a neighborhood in Seattle, Washington, at the base of Queen Anne Hill. While its boundaries are not precise, the toponym usually refers to the shopping, office, and residential districts to the north and west of Seattle Center. The neighborhood is connected to Upper Queen Anne—the shopping district at the top of the hill—by an extremely steep section of Queen Anne Avenue N. known as the Counterbalance, in memory of the cable cars that once ran up and down it. 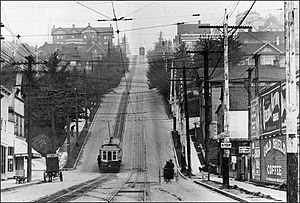 Cable car on the Counterbalance section of Queen Anne Hill

Lower Queen Anne also has a three-screen movie theater, the SIFF Cinema Uptown, and On the Boards, a center for avant-garde theater and music. 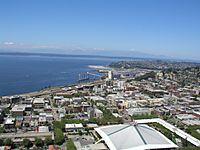 Lower Queen Anne, with KeyArena in the bottom right, as seen from the Space Needle

The Seattle-based newspaper known as the Seattle Post-Intelligencer was located in Lower Queen Anne. Local radio station KEXP-FM moved its headquarters to Lower Queen Anne in a building adjacent to the Climate Pledge Arena in December 2015.

Lower Queen Anne is home to many restaurants, including the only Dick's Drive-In location to have indoor seating.

All content from Kiddle encyclopedia articles (including the article images and facts) can be freely used under Attribution-ShareAlike license, unless stated otherwise. Cite this article:
Lower Queen Anne, Seattle Facts for Kids. Kiddle Encyclopedia.