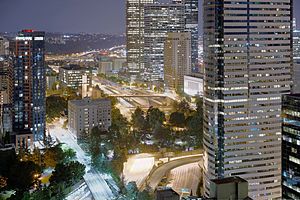 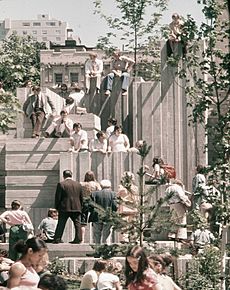 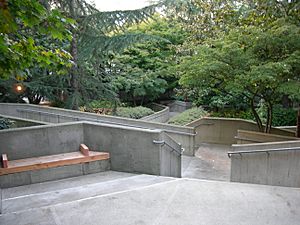 The park winds its way down First Hill, offering both a staircase and wheelchair-accessible ramps.

Freeway Park is an urban park in Seattle, Washington, United States, connecting the city's downtown to the Washington State Convention Center and First Hill. The park sits atop a section of Interstate 5 and a large city-owned parking lot; 8th Avenue also bridges over the park. An unusual mixture of brutalist architecture and greenery, the 5.2-acre (21,000 m2) park, designed by Lawrence Halprin's office under the supervision of Angela Danadjieva, opened to the public on July 4, 1976. A later addition to the park opened in 1982 winds several blocks up First Hill, with a staircase and wheelchair ramp.

The park is also a cultural landscape and a precedent setting park that defines a new land-use typology for American cities. It was listed on the National Register of Historic Places in 2019.

All content from Kiddle encyclopedia articles (including the article images and facts) can be freely used under Attribution-ShareAlike license, unless stated otherwise. Cite this article:
Freeway Park Facts for Kids. Kiddle Encyclopedia.