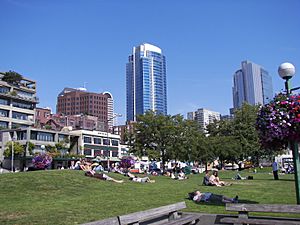 Victor Steinbrueck Park in July 2009. Fifteen Twenty-One Second Avenue is in the background.

The park overlaps the former site of the Washington National Guard Armory, which was originally built around 1909 and damaged by fire in 1962 at a time when the future of the Market itself was a contentious issue. It was eventually torn down in 1968. Victor Steinbrueck, who was instrumental in the preservation of nearby Pike Place Market and Pioneer Square, wrote of the location in 1968: "One of the grandest downtown lookout places is at Western Avenue where it meets Pike Place and Virginia Street. It has been neglected by the city and its possibilities for enjoyment are ignored except by a few habitués and passing pedestrians." Steinbrueck was strongly opposed to the demolition of the armory. "Buildings like this," he wrote, "(and there are very few) offer an irreplaceable tie with the past as well as adding variety and interest to new surroundings. Restoration is not at all impossible or difficult for sympathetic designers. Others can always find practical reasons for destruction."

The city purchased the land in 1968, demolished the remnant of the armory, and transferred ownership to the parks department in 1970. The park was landscaped in 1982 as Market Park. Two cedar totem poles, designed by Steinbrueck himself and carved by James Bender, were added in 1984. After Steinbrueck's death in 1985, the park was renamed after him. His son Peter, also an architect, would later serve on the Seattle City Council from 1997–2007.

The park is an important setting in the Terry Brooks novel A Knight of the Word.

All content from Kiddle encyclopedia articles (including the article images and facts) can be freely used under Attribution-ShareAlike license, unless stated otherwise. Cite this article:
Victor Steinbrueck Park Facts for Kids. Kiddle Encyclopedia.