The Bellevue Arts Museum a museum of contemporary visual art, craft, and design located in Bellevue, Washington, part of the greater Seattle metropolitan area. A nonprofit organization established in 1975, the Bellevue Arts Museum (BAM) provides rotating arts exhibitions to the public. Since 2001, the museum has been located across from Bellevue Square in a three-story building designed by architect Steven Holl. 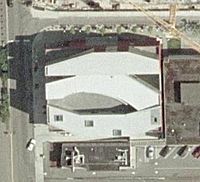 The museum traces its roots back to street fair art in 1947 as the Pacific Northwest Arts and Crafts Association. The group established itself more formally as a nonprofit organization in 1975. After several temporary locations, it moved to the third floor of Bellevue Square, a large shopping center in the center of downtown Bellevue, Washington in 1983. In 2001, the museum began providing programming in its own building. The distinctive new building was designed by noted architect Steven Holl. It is seen by many residents of Bellevue as playing a role in the transformation of the downtown from series of suburban strip malls to a sophisticated city with a variety of cultural attractions.

The museum subsequently ran into financial difficulties and was forced to close to the public in September 2003. After a successful $3 million fundraising campaign and extensive interior remodeling, the museum re-opened on June 18, 2005 with a revised mission focused on art, craft and design and with an emphasis on Northwest artists.

In contrast to conventional art museums, Bellevue Arts Museum has no permanent collection. Rather, it emphasizes education and hands-on involvement through an extensive selection of classes and workshops. Since the late 2010s BAM has been locally recognized for holding unique and high quality exhibitions by artists from the Pacific Northwest.

The Bellevue Arts Museum has offered a broad range of exhibitions across visual design, contemporary craft, and fine art. Exhibitions have included works from architect Louis Kahn (2016), cartoonist Simon Hanselmann (2019), and contemporary wood sculptor Humaria Abid (2017). Since 2010, the Bellevue Arts Museum has held the BAM Biennial, a survey of artwork in a specific medium such as glass, fiber, wood, or ceramic. The museum has curated solo exhibitions of several contemporary ceramic sculptors including Tip Toland (2008) and Patti Warashina (2013).

From 2004 until 2008, Michael Monroe served as the Bellevue Arts Museum's director. Stefano Catalani held the role of director of art, craft, and design at BAM starting in 2010. BAM appointed Benedict Heywood the executive director on September 18, 2017.

During the COVID-19 pandemic, the Bellevue Arts Museum provided over 7,000 arts and crafts kits to children and community members to use at home.

All content from Kiddle encyclopedia articles (including the article images and facts) can be freely used under Attribution-ShareAlike license, unless stated otherwise. Cite this article:
Bellevue Arts Museum Facts for Kids. Kiddle Encyclopedia.