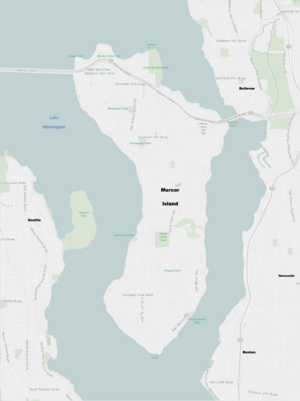 Mercer Island is a city in King County, Washington, United States, located on an island of the same name in the southern portion of Lake Washington. Mercer Island is in the Seattle metropolitan area, with Seattle to its west and Bellevue to its east.

Mercer Island is connected to the mainland on both sides by bridges carrying Interstate 90, with the city of Seattle to the west and the city of Bellevue to the east. The Lacey V. Murrow Memorial Bridge and the parallel Homer M. Hadley Memorial Bridge are floating bridges that span Lake Washington and carry, respectively, eastbound and westbound lanes of Interstate 90 and connect Mercer Island to the northern portion of Seattle's South End. I-90 traverses the northern portion of Mercer Island and is then carried from the island to Bellevue over the East Channel of Lake Washington by the East Channel Bridge. Mercer Island is located closer to Bellevue than it is to Seattle, and is therefore often considered to be part of King County's Eastside.

The ZIP code 98040 is unique to Mercer Island. Mercer Island has the fifth highest per-capita income in the state of Washington and is one of the 100 richest ZIP codes in the USA according to the IRS figures for Adjusted Gross Income.

Mercer Island, named for the Mercer family of Seattle, was first settled between 1870 and 1880. The Mercer brothers often rowed between the island and Seattle to pick berries, hunt, and fish. Those brothers, Thomas Mercer and Asa Shinn Mercer, are members of the Mercer family of Virginia. The first large settlement, East Seattle, was toward the northwest side of the island—near the McGilvra neighborhood. During 1889, a C C Calkins built a large and gilded resort, the Calkins Hotel. The hotel was reached via steamboat between Madison Park, Leschi Park, and the Eastside. Guests included President Benjamin Harrison, of 1901, amongst other well-to-do dignitaries from Seattle to the Eastcoast of the USA. Burnt by a mysterious fire, the hotel was razed during 1908.

The Calkins Landing continued service and presumedly aided location of a more permanent population. A denser urban community with business district developed toward the central northern island between the McGilvra neighborhood and Luther Burbank Park. This community now composes the majority of the island's crest through the Middle Island neighborhood. 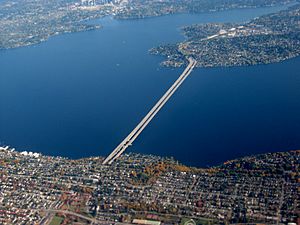 Aerial view of the Interstate 90 floating bridge connecting Seattle and the northern part of Mercer Island.

Mercer Island is the largest populated island in a lake in the US.

This region experiences warm (but not hot) and dry summers, with no average monthly temperatures above 71.6 °F. According to the Köppen Climate Classification system, Mercer Island has a warm-summer Mediterranean climate, abbreviated "Csb" on climate maps.

An estimated 25% of city households are Jewish; the island also has two synagogues and a Jewish Community Center.

According to the 2020 United States Census, Mercer Island's racial and ethnic composition is as follows:

There were 9,109 households, of which 33.5% had children under the age of 18 living with them, 62.3% were married couples living together, 6.5% had a female householder with no husband present, 2.9% had a male householder with no wife present, and 28.3% were non-families. 24.1% of all households were made up of individuals, and 11.8% had someone living alone who was 65 years of age or older. The average household size was 2.48 and the average family size was 2.97.

According to the 2010 United States Census, Mercer Island's racial and ethnic composition is as follows:

There were 9,109 households, of which 33.5% had children under the age of 18 living with them, 62.3% were married couples living together, 6.5% had a female householder with no husband present, 2.9% had a male householder with no wife present, and 28.3% were non-families. 24.1% of all households were made up of individuals, and 11.8% had someone living alone who was 65 years of age or older. The average household size was 2.48 and the average family size was 2.97.

Luther Burbank Park covers 77 acres (310,000 m2) of land and has 0.75 miles (1.2 km) of waterfront. The park has a public boat dock and fishing pier, a swimming beach, an amphitheater, tennis courts, barbecues and picnic facilities, and an off-leash dog area. The city assumed maintenance of the park on January 1, 2003 from King County, which had purchased the park land in 1969.

The Aubrey Davis Park is atop the I-90 tunnel entrances. This park has softball fields, tennis courts, basketball courts, picnic shelters, and the Freeway Sculpture Park. Due to its location atop the I-90 tunnel, the park is also locally referred to as "The Lid."

Clarke Beach is located at the south end of Mercer Island and is home to the annual polar bear swim on New Year's Day.

Mercer Island also has many smaller parks maintained by the city, some of which have waterfront access.

Mercer Island is bisected by Interstate 90, which connects the city to Seattle in the west and Bellevue in the east. The freeway travels over the Lacey V. Murrow and Homer M. Hadley floating bridges over Lake Washington to Seattle and the East Channel Bridge towards Bellevue. The bridges also carry the Mountains to Sound Greenway, which includes a multi-purpose pedestrian and bicycle path. A significant section of the freeway is recessed below street level and covered by the Mercer Island Lid, which includes several parks.

The city's public transportation is provided by King County Metro and Sound Transit, mainly consisting of express bus routes to Seattle and the Eastside. Several routes connect to a park and ride on the north side of the island with 447 stalls. It was expanded into a two-story parking garage in 2008. All-day service for most of the island is provided by Metro Route 204, which is supplemented by Route 630 and several school bus routes during peak periods.

In 2023, a light rail station at the park and ride facility will be opened by Sound Transit, providing service on the 2 Line to Seattle and the Eastside. The light rail line will replace several express routes on Interstate 90 and Mercer Island will function as a major bus–rail interchange.

All content from Kiddle encyclopedia articles (including the article images and facts) can be freely used under Attribution-ShareAlike license, unless stated otherwise. Cite this article:
Mercer Island, Washington Facts for Kids. Kiddle Encyclopedia.