The bridge was built in 1989 and is named for Homer More Hadley, who designed the bridge's companion span, the Lacey V. Murrow Memorial Bridge. Hadley also designed the McMillin Bridge in Pierce County.

When the bridge was built, parallel to the Lacey V. Murrow Memorial Bridge, two reversible high-occupancy vehicle (HOV) lanes were set up to accommodate the traffic flow between Seattle and the suburban Eastside (westbound in the morning, eastbound in the evenings).

Sound Transit and the Washington State Department of Transportation added HOV lanes to the bridge's westbound lanes in 2017. This preceded construction of the East Link light rail line from downtown Seattle to Bellevue and Redmond, which will use the former reversible express lanes. East Link, scheduled to be completed in 2023, will be the first time that a light-rail line will operate on a floating bridge. 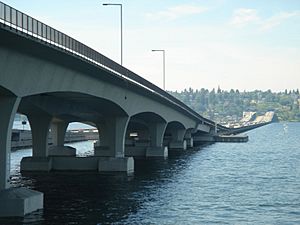 The bridge carries four westbound lanes, including a HOV lane, as well as a bicycle and pedestrian path on the north side.

Prior to 2017, it also carried two reversible lanes, configured to normally carry westbound traffic on weekday mornings and eastbound traffic at other times. Use of the reversible express lanes was restricted to HOV traffic, except for vehicles traveling to and from Mercer Island.

With a total of five traffic lanes and three full-sized shoulders, the Third Lake Washington Bridge was the widest floating bridge in the world, until the completion of the new Evergreen Point Floating Bridge in 2016.

All content from Kiddle encyclopedia articles (including the article images and facts) can be freely used under Attribution-ShareAlike license, unless stated otherwise. Cite this article:
Homer M. Hadley Memorial Bridge Facts for Kids. Kiddle Encyclopedia.