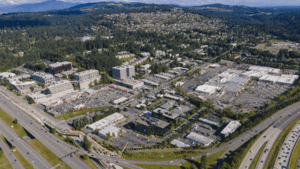 Factoria is a mixed-use suburban neighborhood in south Bellevue, Washington and is one of the city's significant commercial districts. Originally timberland from the 1890s to 1920s and later envisioned as an industrial center, Factoria has since the 1960s evolved into commercial and residential development. Factoria was annexed into Bellevue in 1993. The core neighborhood is bounded by Interstate 90 to the north, Interstate 405 to the west, Newport Way to the east, and Coal Creek Parkway to the south.

Factoria is believed to have once been part of the Duwamish Tribal Territory. "During the 1890s, loggers cut large stands of timber on land now known as Woodridge Hill, Richards Valley, Greenwich Crest, Mockingbird Hill, Monthaven, Newport Shores, and the commercial area of Factoria."

In the late 1890s, the Northern Pacific Railway laid tracks through the largely uninhabited area along the shores of Lake Washington near Mercer Island. In the early 1900s a large industrial center was envisioned by a group of Seattle investors led by E. L. Skeel on what is now the interchange of Interstate 405 and I-90. In 1908 Skeel formed the Mercer Land Company and platted several blocks adjoining the railroad tracks. The new community was to be named Mercer. A stove factory was constructed at the town-site but never manufactured a single stove. By 1911, development of the community was at a standstill and the company, now run by a Sarah Kendall with Skeel as secretary, filed a new plat featuring more blocks and public space. The project was now called Factoria, a name that would hopefully attract major industries, which it never did.

was promoted as an industrial center with coal smoke “belching from hundreds of smokestacks.” Promoters expected at least 20 plants, in addition to the existing Factoria Stove and Range Co., to locate there. But some 15 years after the promoter’s pitch, only the Factoria School had been built and the proposed industrial town of Factoria never got off the ground. The present day Factoria Mall is located on the original Factoria property.

In the late 1920s Factoria became the headquarters for the burgeoning rabbit industry on the East Side. In 1927, an abandoned local factory was converted into a processing plant for canned rabbit meat and fur as well as a marketing headquarters for the industry. In 1939, construction began on a new $800,000 highway project that straightened out the Sunset Highway between Issaquah and Mercer Island and eventually led to the construction of the Lacey V. Murrow Memorial Bridge across Lake Washington. The new four-lane highway passed directly through Factoria and intersected with Lake Washington Boulevard, then the major North-South highway on the East side.

Following the opening of the bridge and highway in 1940, Factoria became a major crossroads. In 1950, the 900-car Sunset Outdoor Theatre was constructed near the intersection by Sterling Theatres, Inc.

Factoria remained largely undeveloped up until the 1960s, when freeway construction put the area at the intersection of two major arterials, Interstate 405 and Interstate 90, which would replace most of the original town-site and create a major suburban retail center.

Factoria serves as a commercial center for surrounding residential neighborhoods, such as Eastgate, Somerset, Newport Hills, Newport Shores, Mockingbird Hill, Greenwich Crest, and Woodridge. The Factoria area represents a community of about 2,100 acres (8.5 km2) bounded by Interstate 90 to the north, Lake Washington to the west, the Somerset Hills to the east, the Newport Hills to the south. The area contains about 5,000 residential units, 11,000,000 square feet (1,000,000 m2) of commercial space, and offices employing 7,500 people. Public transportation in Factoria is served by King County Metro buses, primarily routes 222, 240, and 245. Factoria Boulevard, Richards Road, Eastgate Way, Newport Way, and Coal Creek Parkway are major arterials that lead to or through the Factoria area.

Marketplace @ Factoria, first opened in 1977 under the name Factoria Square and later called Factoria Mall, originally contained about 20 retailers and was anchored by Ernst Home Centers, Lamonts, Britania, DJ's Sound City, Pay 'n Save, and Safeway. In 2008, the mall was slated for new urbanist redevelopment, likely a result of being labeled a dead mall as anchors such as Mervyn's moved out. The mall was renamed Marketplace @ Factoria at this time, and one of Bellevue's two small Wal-Mart stores is now a tenant.

All content from Kiddle encyclopedia articles (including the article images and facts) can be freely used under Attribution-ShareAlike license, unless stated otherwise. Cite this article:
Factoria, Bellevue Facts for Kids. Kiddle Encyclopedia.