Renton is a city in King County, Washington, United States. Situated 11 miles (18 km) southeast of downtown Seattle, Washington, Renton straddles the southeast shore of Lake Washington, at the mouth of the Cedar River. While long an important salmon fishing area for Native Americans, Renton was first settled by people of European descent in the 1860s, and its early economy was based on coal mining, clay production, and timber export. Today, Renton is best known as the final assembly point for the Boeing 737 family of commercial airplanes, but it is also home to a growing number of well known manufacturing, technology, and healthcare organizations, including Boeing Commercial Airplanes Division, Paccar, Group Health Cooperative, IKEA, Providence Health & Services, UW Medicine Valley Medical Center, and Wizards of the Coast. As of 2016, the population in Renton is 101,300, up from 90,927 at the 2010 census. Renton currently is the 8th largest city in Washington State, and is the 4th largest in King County. The National Football League's Seattle Seahawks have a training facility in Renton. It is the second-largest facility in the NFL at 200,000 square feet (19,000 m2).

Among the first European settlers in the present-day Renton, WA area were Henry Tobin and his wife Diana. The town of Renton was accessed via the Seattle and Walla Walla Railroad, the first example of railroad transportation in Seattle. Its' location which was home to many coal mines attracted people such as Erasmus M. Smithers, who is credited with the founding and establishment of the town. Smithers discovered coal there and brought in Charles D. Shattuck as the coal mine operator. Renton was incorporated as a city in 1901 (September 6) when coal mining and timber processing were the most important economic industries in the area. The town was prone to flooding from the Cedar and Black Rivers. In 1916 the completion of the Lake Washington Ship Canal lowered the surface of Lake Washington several feet which consequently eliminated drainage of Lake Washington through the Black River. The Cedar River was then diverted to drain into Lake Washington instead of the Black River. The culmination of these actions reduced the threat of annual flooding.

The population sharply increased during World War II when Boeing built their Renton Factory to produce the B-29 Superfortress.

The game company Wizards of the Coast also is headquartered in Renton. Providence Health System has centralized its administrative offices in Renton, along with Group Health Cooperative.

Owing to its location at the confluence of three major freeways (I-5, I-405, and SR 167), Renton's economic development team has lured a number of specialty retailers that draw consumers from around the region, including Fry's Electronics and IKEA.

Renton has a unique and well-loved institution in its library, built directly over the Cedar River. Designed by Johnston-Campanella & Co. in 1964 and opened in 1966, the Cedar River Library stretches 80 feet (24 m) across the river, next to Liberty Park. The library was annexed into the King County Library system in 2010. The walkway in front of the library's entrance forms a deck from which salmon can be viewed as they make their way up the river, particularly during spawning season. In 2011, the iconic building was the center of much controversy, with the City of Renton and the King County Library System developing plans to build a new library closer to the downtown core. Residents wishing to retain the library in its river setting sponsored a petition, and were ultimately successful in convincing City leaders to put the issue to a vote of the people. On August 7, 2012, Renton voters decided the fate of the library with Proposition 1, and found 76% of the voting population supporting the Cedar River location. Discussions ensued between citizen activist groups, city leaders and KCLS over how the library plans would move forward in light of this change, and what affect it would have on the Highlands Library project. The library renovation moved ahead with a design by Miller Hull Architects. The newly renovated Renton Library opened on August 22, 2015.

Formerly synonymous with the large industrial companies such as Boeing, and Kenworth, a pattern of future development was established with the attraction of the first IKEA in the Pacific Northwest to Renton in 1994. February 2007 saw the expansion of the Federal Aviation Administration's Northwest Mountain Regional Office across the street from its current headquarters (will be moved to Des Moines). A new branch of the Federal Reserve Bank now calls Renton home, beginning operations in the spring of 2008 on the site of the former Longacres horse-racing track.

To date, myriad development of major retail, residential, and revitalization projects are amidst planning, in construction, or have been successfully executed. Among which include Port Quendall, a land parcel in north Renton, that has become the new home to the Virginia Mason Athletic Center (VMAC), housing the Seattle Seahawks Headquarters and training facility that opened in August 2008; before then, the Seahawks trained in Kirkland, Washington. The team's new state-of-the-art Renton facility, at an expansive 200,000 square feet (19,000 m2), is the second-largest facility in the NFL.

In the mid-1990s, Renton undertook a major redevelopment effort to revitalize its downtown core, which had declined in commercial prominence since the opening of the Southcenter Mall in Tukwila in 1968. The many car dealerships that had previously occupied the center of downtown Renton were encouraged through economic incentives to relocate to a newly created auto sales zone close to the I-405/SR-167 interchange. In place of the old dealerships downtown, a new transit center and parking garage were built in partnership with King County Metro. Simultaneously, a number of privately developed mixed-use residential and retail buildings were also built within a one block radius of the transit center, allowing for one-bus commutes to Seattle, Bellevue, Redmond, and other employment centers. A new town square, The Piazza, was constructed next to the transit center, and an existing car dealership building was heavily remodeled into an events center, now known as the Pavilion Building. The Piazza is home to a weekly Farmers' Market during the summer months, as well as other community events throughout the year, while the city-owned Pavilion Building can be rented for parties, fundraisers, and other events, with onsite catering provided by a private caterer. 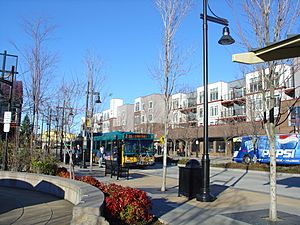 Centered on former Boeing Co. property near the south shore of Lake Washington is a 68 acres (280,000 m2) development named The Landing. Two high-end apartment communities at The Landing, The Sanctuary and The Reserve, contain a combined 880 residences, targeting a young professional demographic. The first commercial tenants of The Landing arrived in October 2007, and as of March 2012, 80% of the retail space was occupied. The nearby Southport development, located directly on the shoreline of Lake Washington, was once the site of the Shuffleton power plant until it was demolished in 2001. Southport is now home to The Bristol luxury apartments, and the 347-room, 12-story Hyatt Regency Lake Washington is scheduled to open in June 2017.

According to the United States Census Bureau, the city has a total area of 23.54 square miles (60.97 km2), of which, 23.12 square miles (59.88 km2) is land and 0.42 square miles (1.09 km2) is water, most of which is the Cedar River. Potential Annexation Areas (PAAs) include the communities of Fairwood southeast of Renton, the East Renton Plateau on the eastern edge of Renton, and West Hill northwest of Renton. These communities are large unincorporated urban areas that are encouraged by the King County Annexation Initiative to incorporate as cities or annex into neighboring cities. As of 2012 these three PAAs are not part of the City of Renton, and not included in its demographics or statistics.

Renton is among a handful of cities in the Puget Sound Region with an independent street grid system. Roads names beginning with sectional divisions (N 32nd ST) generally follow a latitudinal direction, while roads names ending in a sectional direction (Duvall Ave NE) generally follow a longitudinal direction. Many of the avenues in the city are named in honor of other cities in Washington. The city also has its own housing authority. This helps the city to avoid higher regional taxes.

Renton is bordered to the north by the city of Newcastle, Washington. Along the east side of Renton is the border of the Urban Growth Boundary established by King County, as such there is no incorporated city directly east of Renton. The geographical characteristics of Renton's eastern border are varied and include (from north to south) the south flank of Cougar Mountain descending southward merging with the community of May Valley. The terrain then elevates south of May Valley to the communities of the East Renton Plateau before descending to the north bank of the Cedar River. Renton is bordered to the south by the city of Kent, Washington. The western border consists of the city of Tukwila, Washington, and finally the unincorporated King County community West Hill and Lake Washington to the northwest. 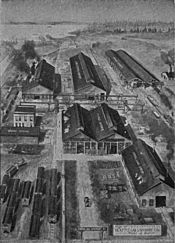 There were 36,009 households of which 32.4% had children under the age of 18 living with them, 43.2% were married couples living together, 11.9% had a female householder with no husband present, 5.5% had a male householder with no wife present, and 39.3% were non-families. 30.3% of all households were made up of individuals and 7.9% had someone living alone who was 65 years of age or older. The average household size was 2.51 and the average family size was 3.16.

All content from Kiddle encyclopedia articles (including the article images and facts) can be freely used under Attribution-ShareAlike license, unless stated otherwise. Cite this article:
Renton, Washington Facts for Kids. Kiddle Encyclopedia.