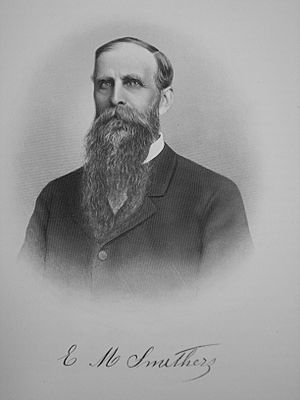 Erasmus M. Smithers (February 17, 1830–1900, Renton, Washington) was one of the European pioneers of the Pacific coast and the founder of the city of Renton, King County, Washington. His wife and her first husband had settled on the land where the town is now located in 1853, fifteen miles (24 km) from what is now Seattle. At the time there were no white settlers at a point nearer than Seattle, which was then a frontier settlement.

Smithers was born in Virginia on February 17, 1830 to a family being of English origin and which had been among the early settlers in Virginia and North Carolina. His father, Samuel Smithers, a farmer, was born in Virginia, and married a Miss Hale, also a member of one of the old families of that state.

He was raised in Virginia and his early education was very limited in scope. At age 19 he left Virginia and set out for the west. A friend had informed him that two young ladies were about to leave for Oregon with a company, and that one of the members of the party, Green Olds, desired to secure the services of a young man to aid him during the journey across the plains.

He paid $50 to join the company. On the May 8, 1852 the company embarked with twenty wagons drawn by ox teams. 15 miles (24 km) west of Omaha, Nebraska, a large band of Indians met them at a bridge and demanded a payment of one dollar a wagon before they passed on, but the settlers were able to fight them off.

The trip Iowa City, Iowa to The Dalles, Oregon took six months, and they then continued to Portland, Oregon where Smithers found a job assisting in the construction of a mill. In April, 1853, he went to Seattle, selling timber to ships bound to San Francisco, California. He brought with him from Portland three yoke of cattle and hauled logs to build the Fort Madison, Washington mill. When the Indian war of 1855 broke out, he volunteered for service, and continued a member of the volunteer militia until 1856.

In November 1857, he married Diana B. Gilman (born 1824, Orono, Maine), the widow of Henry H. Tobin. Diana and Henry had married in Lincoln, Maine in March 1851, and had been the first settlers of the Renton area in 1853, where they had built a timber mill in 1854. During the Puget Sound war with the Duwamish natives in 1855, the mill burnt down and the settlers were driven away. Soon after their wedding Erasmus and Diana moved to Tobin's 320 acres (1.3 km2) claim and claimed another neighboring 160 acres (0.65 km2), which were wilderness at the time (the native population had been resettled elsewhere). The Smithers built a small shack, where they lived initially and where their children, Ada (1858), Edwin M. (1862), and Fred G. (1866), were born. They built a larger house in 1875.

The old city of Renton was located on a portion of Smithers' land. He platted the town and placed the lots on the market. He also established a coal mine which he later sold. The coal seam had been discovered in Renton in 1853 or 1854 by Henry Tobin's first neighbor, Dr. R.H. Bigelow.

A lifelong member of the Democratic Party, his first vote having been cast in support of Isaac I. Stevens for governor of the territory. He was a member of the Washington Pioneer Society and during the American Civil War he was initiated into the Freemasonry, being one of the first members of St. John's Lodge of Seattle, one of the first lodges instituted in the territory.

He was on board of trustees of the South Prairie Coal Mining Company. He was appointed by Governor Edward Selig Salomon and once by Governor Elisha Peyre Ferry a trustee of University of Washington and was elected president of the board of regents.

All content from Kiddle encyclopedia articles (including the article images and facts) can be freely used under Attribution-ShareAlike license, unless stated otherwise. Cite this article:
Erasmus M. Smithers Facts for Kids. Kiddle Encyclopedia.