Orono is a town in Penobscot County, Maine, United States. Located on the Penobscot and Stillwater rivers, it was first settled by American colonists in 1774. They named it in honor of Chief Joseph Orono, a sachem of the indigenous Penobscot nation who long occupied this territory.

In the nineteenth century, the town became a center of the lumber industry. Sawmills on the rivers were powered by the water, and logs were floated downriver on the Penobscot for shipping and export from coastal ports.

Since 1865 it has been the location of the University of Maine, established as a land-grant institution and the state's flagship educational institution. In the fall of 2018, the university enrolled 11,404 students at Orono. Not including university residents, the town's population was 10,362 at the 2010 census.

This climatic region is typified by large seasonal temperature differences, with warm to hot (and often humid) summers and cold (sometimes severely cold) winters. According to the Köppen Climate Classification system, Orono has a humid continental climate, abbreviated "Dfb" on climate maps. 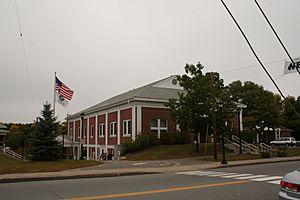 There were 2,831 households, of which 17.8% had children under the age of 18 living with them, 32.9% were married couples living together, 7.0% had a female householder with no husband present, 3.5% had a male householder with no wife present, and 56.6% were non-families. 30.6% of all households were made up of individuals, and 11.9% had someone living alone who was 65 years of age or older. The average household size was 2.29 and the average family size was 2.77. 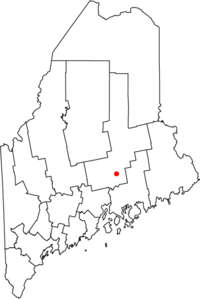 Location of town of Orono in state of Maine

All content from Kiddle encyclopedia articles (including the article images and facts) can be freely used under Attribution-ShareAlike license, unless stated otherwise. Cite this article:
Orono, Maine Facts for Kids. Kiddle Encyclopedia.