Panorama of the Penobscot River in Millinocket, Maine

The Penobscot River is a 109-mile-long (175 km) river in the U.S. state of Maine. Including the river's West Branch and South Branch increases the Penobscot's length to 264 miles (425 km), making it the second-longest river system in Maine and the longest entirely in the state. Its drainage basin contains 8,610 square miles (22,300 km2). 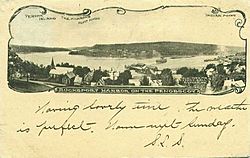 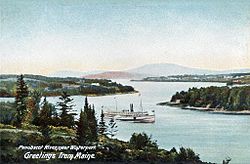 View near Winterport about 1906

Most historians have accepted the Penobscot region as Jean Allefonsce's source for Norumbega, though the matter was hotly contested by some nineteenth century antiquarians, who argued that the name should be identified with their own river or region.

The Penobscot River was an early trade corridor to interior Maine from the Atlantic coast. Ocean ships could navigate upstream to Bangor. The cities of Rockland, Belfast, Brewer and Bangor, and the towns of Rockport, Camden, Northport, Searsport, Stockton Springs, Castine, Bucksport, Frankfort, Winterport, Orrington, and Hampden developed adjacent to the Penobscot River estuary. The river upstream of Bangor became an important transportation corridor for log driving to bring wooden logs and pulpwood from interior forests to sawmills and paper mills built to use water power where the city of Howland and the towns of Veazie, Orono, Old Town, Milford, Passadumkeag, West Enfield, Lincoln, Winn, Mattawamkeag, Medway, and Millinocket developed.

The first European known to have explored the river was the Portuguese Estêvão Gomes in 1524, followed by the Frenchman Samuel de Champlain in 1605. A few years later French Jesuit priests came among the Penobscot people as missionaries and converted them to Catholicism. The French settlement of Pentagouet, now Castine, was founded at the point where the river becomes Penobscot Bay, and the Penobscot people made a permanent settlement at Indian Old Town, Maine on an island above the head of navigation, around the Catholic mission. Throughout the first half of the 17th centuries, these were likely the only permanent settlements on the river, although the Penobscots considered the entire river and bay their hunting ground and maintained other seasonal villages along its banks.

In 1669, the Mohawk tribe made raids from the west that were very destructive to the Penobscot people. During Father Rale's War, the English settlers in Massachusetts also sent periodic raiding parties to the Penobscot, destroying the primary native village in 1723. In a treaty of 1752, however, Massachusetts laid claim to the entire Penobscot watershed, and in 1759 the Pownall Expedition, led by Governor Thomas Pownall, established Fort Pownall on Cape Jellison in what is now Stockton Springs. This signaled the beginning of English domination, and the incorporation of the Penobscot River valley into New England. 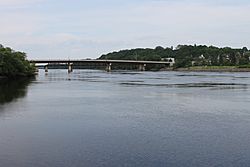 The Penobscot at Bangor, Maine 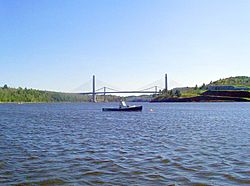 Penobscot Narrows and Fort Knox in 2007

The first permanent English settler on the river was Joshua Treat (1726–1802), who was initially the armorer and translator at Fort Pownall. His oldest son, Joshua Treat, Jr., built a log house and sawmill at Marsh Bay in what is now Frankfort, and other members of their extended family, joined by additional settlers from Massachusetts and New Hampshire, pushed ever further up-river, eventually restricting the Penobscot people to Indian Island Old Town, Maine, the present Penobscot Indian Reservation.

During the American Revolutionary War, the river and bay were the site of the disastrous 1779 Penobscot Expedition, where an entire American fleet was destroyed in a botched attempt to retake Maine from the British. During the War of 1812, the British again invaded Maine and defeated an American force at the Battle of Hampden, sacking the town of Bangor in the process. To prevent this from happening a third time, and because the nearby boundary between the United States and British Canada was still contested into the 1840s, the Federal government in 1844 began constructing a huge granite fort, Fort Knox, opposite the town of Bucksport, near the mouth of the river. The fort never fired a shot in anger, but remains one of the Penobscot's major man-made landmarks.

In the 19th century the river was a conduit for the transport of logs from Maine's Great North Woods, to be sawn into lumber at mills around Old Town and Orono, and transported on ships from Bangor, at the head of tide. (The average high tide at Bangor is 13 feet (4 m) as of 2009.) A secondary economic use made of the river late in the century was as a source of sawn ice for urban markets.

In the 20th century, lumbering was largely supplanted by papermaking, in the form of large wood pulp and paper mills located all along the river from Millinocket and East Millinocket in the north, to South Brewer and Bucksport in the south. Wood pulp and paper mills create dioxins as a byproduct of the chlorine bleaching process in making paper. This substance was discharged from seven mills located close to the Tribal community of Penobscot people, along the Penobscot river. Dioxins, which are highly potent toxic chemicals that may cause cancer and other health problems, were being poured daily into this adjacent river, the Penobscot. Rebecca Sockbeson, a Penobscot, is quoted saying that her people have survived on fish from this river, but "now we are dying from it." She continued on to say that "neither dioxin nor cancer is indigenous to the Penobscot people, however they are both pervasive in my tribal community." The health and survival of the Penobscot people is further threatened by the impact that persistent organic pollutants (POPs) have on reproduction and the health of their children. Sockbeson concludes that a treaty is required to ensure that "the breast and spoon we feed our babies with is not filled with cancer, diabetes, learning disabilities, and attention deficit [disorder]."

The development of cheap hydropower also attracted other types of light manufacturing, like textiles and shoes.

In the 21st century, with the continuing decline of the Maine paper industry, and the divestiture of its woodlands, the Penobscot watershed is becoming more and more associated with recreational use (fishing, hunting, boating, and tourism) and less with manufacturing. As part of the Penobscot River Restoration Project, several dams were modified or removed to improve river conditions. Demolition began on the Great Works Dam in 2012, and the Veazie Dam in 2013. A fish ladder has also been installed at Milford Dam. A fish bypass was installed at Howland Dam. This has led to an increase in the number of Atlantic Salmon, Shad, and other fish species in the river. 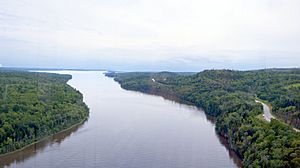 In 1931 the Waldo-Hancock Bridge was opened to carry US Route 1 across the river at the Penobscot Narrows between Prospect, in Waldo County, and Verona Island just below Bucksport. That bridge was closed and replaced in 2006 by the Penobscot Narrows Bridge, a 2,120 foot long, $85,000,000 structure with 135 feet between the water and the bridge’s deck, and the original bridge was subsequently demolished in 2013. The new bridge also features an observatory open to the public located 420 feet above the surface of the river in the support tower on the Waldo County side. It is the only bridge observatory in the United States, and only one of four bridge observatories in the world. The two 447 foot tall granite towers of the bridge are patterned after the Washington Monument which had been largely built with granite quarried from nearby Mt. Waldo.

Angling, including fly fishing, is common on the river. The West Branch is known as a world class landlocked salmon river, while the East Branch is known for its smallmouth bass fishery. In 2008, the Atlantic Salmon Commission opened the main stem of the river to catch and release fly fishing for Atlantic salmon.

The West Branch is home to landlocked salmon and Brook Trout. There are many deep pools within the river, due to the many slate ledges, making the river ideal for fishing from shore, though there are still areas that are good for canoe fishing. With the Ripogenus Dam by Chesuncook Lake, the West Branch is able to sustain the large landlocked salmon found there, with twelve miles of heavy rapids, deep runs, large pools, and slower moving water in some sections. Baxter State Park is located to the north.

Some of the river's rapids are class IV or even V, making this one of the roughest rivers in the area, and attracting whitewater rafters. Until 1971 the West Branch was a main thoroughfare for the Great Northern Paper Company to sluice its logs to its mill in Millinocket, Maine. In 1971 Great Northern opened the Golden Road (Maine) for transporting the logs. The road parallels the river. The paper industry has been greatly diminished and the Millinocket mill was torn down in 2013. The Golden Road, still a private road, continues to be used by logging trucks and also people using the Penobscot.

May to June are usually when mayflies begin their first hatch. Caddisflies also start their massive hatch around this time, but it can extend into the fall at times. Stoneflies tend to hatch throughout the season. In the West Branch, fishermen are often required to use a variety of different techniques.

All content from Kiddle encyclopedia articles (including the article images and facts) can be freely used under Attribution-ShareAlike license, unless stated otherwise. Cite this article:
Penobscot River Facts for Kids. Kiddle Encyclopedia.