Millinocket is a town in Penobscot County, Maine, United States.

The population was 4,506 at the 2010 census. Millinocket's economy has historically been centered on forest products and recreation, but many area paper mills have closed in recent years.

Millinocket was first settled in 1829 by Thomas Fowler and his family, who cleared land for a farm. When the Bangor and Aroostook Railroad extended service to Houlton in 1894, the line ran through the area, opening it to development. 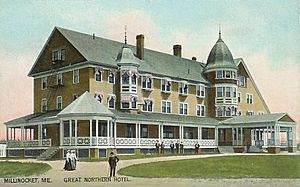 Charles W. Mullen, an engineering graduate from the University of Maine, proposed a hydroelectric dam on the Penobscot River. He recognized the falls as an ideal water power source to operate a large pulp and paper mill. Mullen contacted Garret Schenck, vice-president of the International Paper mill at Rumford Falls and an expert in the industry, about building a pulp and paper mill near the dam. Mr. Schenck agreed, and set about obtaining the necessary financial backing. 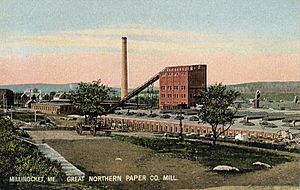 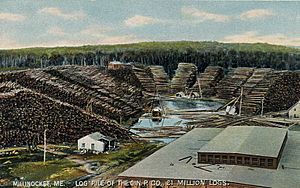 After securing land rights, the chosen site was at the junction of the West Branch of the Penobscot River and Millinocket Stream, where it stands today. Things moved quickly, and on May 15, 1899, construction began on the new Great Northern Paper Company paper mill. As the location was not near existing towns, it became necessary to build one. Millinocket, meaning "the land of many islands" after all the islands in the Penobscot River, was incorporated on March 16, 1901.

Garret Schenck contracted bonded labor, especially stonemasons from Italy. The term "bonded" in this case referred to the fact that the Italians owed for the passage to America and were in debt the minute they set foot in this country. Italian masons were largely responsible for the construction of the Millinocket mill.

Throughout the 20th century, the community prospered. It developed a reputation as a small but successful rural town, mostly due to the paper industry, but also to its proximity to Katahdin, Maine's tallest mountain, and Moosehead Lake, Maine's largest lake.

In early 2003, however, Great Northern Paper announced it had filed for bankruptcy protection for its Millinocket and East Millinocket mills. Since then, the mill town has struggled to reshape its economy, while receiving significant help from the state government and local economic development efforts. Shortly after closing the mills, a Canadian corporation purchased the bankrupt paper mills in both Millinocket and East Millinocket. Currently, the paper mill employs over 200 workers in East Millinocket Mill only. In addition to the traditional forest products industry, Millinocket has been growing a service economy, and has grown into a major four-season tourist attraction. The region is served by the Millinocket Municipal Airport, which sells both 100LL avgas and jet fuel.

The town is crossed by State Route 11 and 157. The town of East Millinocket is located 8 miles (13 km) to the east. Millinocket is the closest town to Mount Katahdin, located in Baxter State Park 20 miles (32 km) to the northwest. At an elevation 5,270 feet (1,610 m), its summit is the highest point in Maine.

Millinocket Lake is 9 miles (14 km) northwest of town, and is drained by Millinocket Stream, which flows through the town of Millinocket into the West Branch Penobscot River 2 miles (3.2 km) south of town. The lake is fed by Sandy Stream, which drains the southeastern slopes of Mount Katahdin by tributaries including Roaring Brook, Avalanche Brook, Spring Brook, Beaver Brook, and Rum Brook. Sandy Stream is a good spawning habitat for rainbow smelt, which are a primary prey for lake trout and land-locked Atlantic salmon living in the lake.

This climatic region is typified by large seasonal temperature differences, with warm to hot (and often humid) summers and cold (sometimes severely cold) winters. According to the Köppen Climate Classification system, Millinocket has a humid continental climate, abbreviated "Dfb" on climate maps.

There were 2,167 households of which 19.3% had children under the age of 18 living with them, 48.4% were married couples living together, 8.7% had a female householder with no husband present, 3.1% had a male householder with no wife present, and 39.8% were non-families. 34.2% of all households were made up of individuals and 17.1% had someone living alone who was 65 years of age or older. The average household size was 2.06 and the average family size was 2.58.

There were 2,295 households, out of which 25.7% had children under the age of 18 living with them, 55.7% were married couples living together, 9.1% had a female householder with no husband present, and 32.2% were non-families. 28.3% of all households were made up of individuals and 14.5% had someone living alone who was 65 years of age or older. The average household size was 2.25 and the average family size was 2.69.

Millinocket is an important setting in several chapters of Maine writer Van Reid’s first novel Cordelia Underwood, or the Marvelous Beginnings of the Moosepath League. The novel takes place in July 1896 and combines elements of adventure, mystery, romance, and comedy with occasional undertones of the supernatural. It is the first novel in Reid’s well-received The Moosepath Saga and was named a New York Times Notable Book of the Year in 1998.

Millinocket is the setting for Bluebird (2013 film).

One of Bert & I's stories asked the question "Which way to Millinocket?"

All content from Kiddle encyclopedia articles (including the article images and facts) can be freely used under Attribution-ShareAlike license, unless stated otherwise. Cite this article:
Millinocket, Maine Facts for Kids. Kiddle Encyclopedia.