Winterport is a town in Waldo County, Maine, United States. The population was 3,757 at the 2010 census.

First settled in 1766 as part of Frankfort, it was set off and incorporated on March 12, 1860. It was named Winterport because of its fine harbor on the Penobscot River estuary, which generally remained ice free, and so became a busy local terminus for trade and shipping during winter months. When the upper Penobscot River froze, commodities like flour were hauled in large quantities from here to Bangor.

In 1841, Theophilus Cushing opened a large steam mill which manufactured 11,000,000 feet of lumber annually. It also made sugar box shooks, lath, clapboard, and soap and candle boxes. The town had two cooperage factories. Other industries produced harnesses, cheese and butter, and men's vests. Until the Panic of 1857, Winterport was a shipbuilding center. But the principal business for most of the town was agriculture. 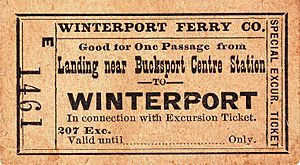 Winterport Ferry Co. ticket for travel between Winterport and Bucksport in the 1920s

The town is crossed by U.S. Route 1A, as well as Maine State Route 69 and Maine State Route 139. It borders the towns of Frankfort to the south, Monroe to the west, and Hampden and Newburgh to the north. Bucksport lies across the Penobscot River to the east which prior to the opening of the Waldo-Hancock Bridge in 1931 was reached from Winterport by way of the Winterport Ferry Co.

There were 1,503 households, of which 32.8% had children under the age of 18 living with them, 58.7% were married couples living together, 10.4% had a female householder with no husband present, 4.1% had a male householder with no wife present, and 26.8% were non-families. 20.0% of all households were made up of individuals, and 6.5% had someone living alone who was 65 years of age or older. The average household size was 2.50 and the average family size was 2.84.

All content from Kiddle encyclopedia articles (including the article images and facts) can be freely used under Attribution-ShareAlike license, unless stated otherwise. Cite this article:
Winterport, Maine Facts for Kids. Kiddle Encyclopedia.