Hampden is a town on the Penobscot River estuary in Penobscot County, Maine, United States. The population was 7,257 at the 2010 census. Hampden is part of the Bangor metropolitan statistical area.

The town was originally called Wheelersborough after its original settler, Benjamin Wheeler. It was incorporated on February 24, 1794, and named after the English patriot John Hampden.

During the War of 1812, on September 3, 1814, about 400 local militia under the command of Brigadier General John Blake of nearby Brewer attempted to hold off a superior force of British regulars at Hampden. The American line, however, collapsed before a charge and was quickly routed. The Americans suffered one casualty with eleven wounded, and the British lost two (one an officer). A civilian spectator was also killed. The British fleet, which under command of Sir John Coape Sherbrooke (then lieutenant governor of Nova Scotia) had recently captured Castine, looted Hampden and nearby Bangor. They were trying to capture the USS Adams, a frigate with 750 men which had fled up the Penobscot River and anchored at Hampden. The crew of Adams, under Captain Charles Morris, burned the ship to prevent her capture and subsequently escaped overland.

General Blake and two other officers, Lieutenant-Colonel Andrew Grant of Hampden and Major Joshua Chamberlain of Brewer (grandfather of Civil War general Joshua L. Chamberlain), were court-martialed in Bangor in 1816 for their part in the defeat. Blake and Chamberlain were both exonerated, but Grant was cashiered.

This climatic region is typified by large seasonal temperature differences, with warm to hot (and often humid) summers and cold (sometimes severely cold) winters. According to the Köppen Climate Classification system, Hampden has a humid continental climate, abbreviated "Dfb" on climate maps.

There were 2,862 households, of which 35.4% had children under the age of 18 living with them, 58.4% were married couples living together, 9.6% had a female householder with no husband present, 3.8% had a male householder with no wife present, and 28.3% were non-families. 21.5% of all households were made up of individuals, and 8.2% had someone living alone who was 65 years of age or older. The average household size was 2.53 and the average family size was 2.95. 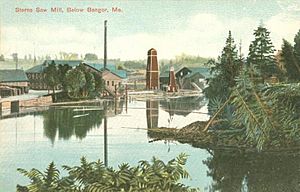 All content from Kiddle encyclopedia articles (including the article images and facts) can be freely used under Attribution-ShareAlike license, unless stated otherwise. Cite this article:
Hampden, Maine Facts for Kids. Kiddle Encyclopedia.