Old Town is a city in Penobscot County, Maine, United States. The population was 7,840 at the 2010 census. The city's developed area is chiefly located on relatively large Marsh Island, though its boundaries extend beyond that. The island is surrounded and defined by the Penobscot River to the east, and the Stillwater River to the west.

Abenaki Indians called it Pannawambskek, meaning "where the ledges spread out," referring to rapids and drops in the river bed. The French established a Jesuit Catholic mission here in the 1680s. Nearly a century later after Great Britain took over French territory following its victory in the Seven Years' War, the area was settled by English pioneers in 1774. The name Old Town derives from "Indian Old Town", which was the English name for the largest Penobscot Indian village, now known as Indian Island.

Located within the city limits but on its own island in the Penobscot River, the reservation is the current and historical home of the Penobscot Nation.

Old Town may be best known for Old Town Canoe Co., a major manufacturer of canoes and kayaks, which has been based in the city for more than 100 years. The city's location along a series of rapids in the Penobscot River, near the head of tide just downstream in Bangor, made it an ideal location in the 1800s to marshal the water power for mills to process lumber from the millions of board feet of spruce and pine logs floated annually down the Penobscot.

Today many residents work for the University of Maine in Orono and the Eastern Maine Medical Center in Bangor, the two largest employers in the area. Old Town is home to a former Georgia-Pacific paper mill, which is being redeveloped for adaptive reuse.

The city of Old Town includes Treat-Webster Island, a.k.a. French Island, a predominantly residential neighborhood located on a small island in the middle of the Penobscot River. French Island is the intermediate land mass between Milford and Old Town; it is connected on either side by a bridge.

The city is crossed by Interstate 95, U. S. Route 2 and 2A, and state routes 16, 43 and 116. It borders the towns of Orono to the south, Glenburn to the west, Hudson to the northwest, Alton and Argyle Township to the north, and (separated by water) is near Milford east, and Bradley to the southeast.

This climatic region is typified by large seasonal temperature differences, with warm to hot (and often humid) summers and cold (sometimes severely cold) winters. According to the Köppen Climate Classification system, Old Town has a humid continental climate, abbreviated "Dfb" on climate maps. 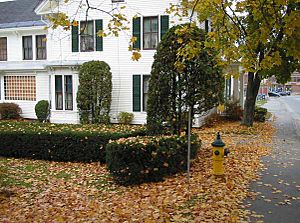 There were 3,382 households of which 24.8% had children under the age of 18 living with them, 40.7% were married couples living together, 11.7% had a female householder with no husband present, 3.4% had a male householder with no wife present, and 44.3% were non-families. 27.0% of all households were made up of individuals and 10.7% had someone living alone who was 65 years of age or older. The average household size was 2.31 and the average family size was 2.76.

There were 3,426 households out of which 26.1% had children under the age of 18 living with them, 44.7% were married couples living together, 10.1% had a female householder with no husband present, and 41.8% were non-families. 29.1% of all households were made up of individuals and 11.7% had someone living alone who was 65 years of age or older. The average household size was 2.30 and the average family size was 2.83. 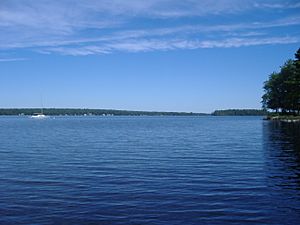 Listed in the National Register of Historic Places:

All content from Kiddle encyclopedia articles (including the article images and facts) can be freely used under Attribution-ShareAlike license, unless stated otherwise. Cite this article:
Old Town, Maine Facts for Kids. Kiddle Encyclopedia.