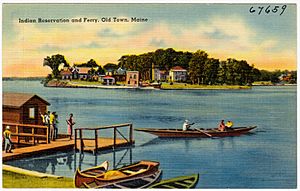 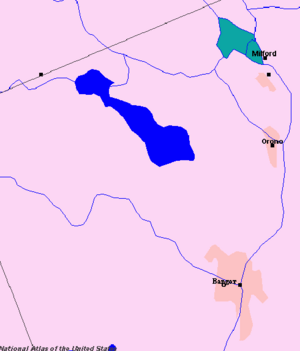 Seal of the Penobscot Indian Nation of Maine 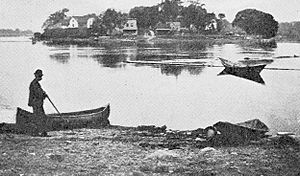 The Penobscot people long inhabited the area between present-day Old Town and Bangor, and still occupy tribal land on the nearby Penobscot Indian Island Reservation. The first European to visit the site was probably the Portuguese Estêvão Gomes in 1524, who was working for Spain. He was followed by the French explorer Samuel de Champlain in 1605. Champlain was looking for the mythical city of Norumbega, thought to be where Bangor now lies. French missionary priests settled among the Penobscot. This valley was contested between France and Britain into the 1750s; after Britain defeated France in the Seven Years' War, the territory became dominated by England. It was one of the last northern regions to become part of New England. One of the most important Penobscot chiefs was Madockawando.

There were tensions on the border between New England and Acadia, which New France defined as reaching the Kennebec River in southern Maine. English settlers from Massachusetts (whose charter included the Maine area) had expanded their settlements into Acadia. To secure New France's claim to present-day Maine, New France established Catholic missions among the three largest native villages in the region: one on the Kennebec River (Norridgewock); one farther north on the Penobscot River (Penobscot) and one on the Saint John River (Medoctec). For their part, in response to King Philip's War, the five Indian tribes in the region of Acadia created the Wabanaki Confederacy to form a political and military alliance with New France to stop the New England expansion.

On Abbé Petit's advice, Father Louis-Pierre Thury settled at Pentagouet (Castine, Maine) in 1690, near Jean-Vincent d'Abbadie de Saint-Castin, where he remained eight years. He acquired great influence over the Abenaki and took part in their expeditions. In 1689 he accompanied Saint-Castin on the raid that resulted in the destruction of Pemaquid (1689); he left a detailed account of events. In 1692 Thury accompanied a war party against York (Maine) in what became known as the Candlemas Massacre.

Benjamin Church's third expedition to Acadia during the war was in 1692 when he conducted a retaliatory raid with 450 men against the Penobscot village.

Two years later, Thury worked to thwart the actions of Phips, who wanted to keep the Abenaki neutral; Thury played an important role in retaining them under French influence. He took part in the attack against Pescadouet (Oyster Bay) in New Hampshire, and was present with Robinau de Villebon and a party of Abenaki at the capture of Pemaquid by Pierre Le Moyne d'Iberville in 1696. The bishop of Quebec made him his vicar general in 1698 and appointed him to be the superior of the missions in Acadia.

Madockawando and others from Penobscot fought alongside Hertel Portneuf and St. Castin at the Battle of Fort Loyal (May 1690). They were also involved in Raid on Wells (1692). Finally they accompanied Villie in the Raid on Oyster River in 1694. He died during the war in 1697.

On 15 July 1722, Father Lauverjat from Penobscot led 500-600 natives from Penobscot and Medunic (Maliseet) to lay siege to Fort St. Georges in Colonel Thomas Westbrook's home town of Thomaston for twelve days. They burned the sawmill, a large sloop, and sundry houses, and killed many of their cattle. Five New Englanders were killed and seven were taken prisoner, while the New Englanders killed twenty Maliseet and Penobscot warriors.

During Father Rale's War, Father Lauverjat was established at the mission. On March 9, 1723, Colonel Thomas Westbrook from Thomaston led 230 men to the Penobscot River and traveled approximately 32 miles (51 km) upstream to the Penobscot village. They found a large Penobscot fort—70 yards (64 m) by 50 yards (46 m), with 14-foot (4.3 m) walls surrounding 23 wigwams. There was also a large chapel (60 by 30 feet (18.3 by 9.1 m)). The village was vacant of people, and the soldiers burned it to the ground.

Starting in 1775, Condeskeag became the site of treaty negotiations by which the Penobscot people were made to give up almost all their ancestral lands, a process complete by about 1820, when Maine became a state. The tribe was eventually left with only their main village on an island upriver from Bangor, called "Indian Old Town" by the settlers. Eventually a white settlement taking the name Old Town was planted on the river bank opposite the Penobscot village, which began to be called "Indian Island." It continues as the base of the federally recognized Penobscot Nation.

The reservation is home to a small museum, as well as Penobscot High Stakes Bingo, which was established in 1973. This was one of the first Native American gambling enterprises operating in the country.

There were 214 households out of which 44.4% had children under the age of 18 living with them, 35.0% were married couples living together, 25.2% had a female householder with no husband present, and 26.6% were non-families. 22.4% of all households were made up of individuals and 7.0% had someone living alone who was 65 years of age or older. The average household size was 2.61 and the average family size was 2.97.

All content from Kiddle encyclopedia articles (including the article images and facts) can be freely used under Attribution-ShareAlike license, unless stated otherwise. Cite this article:
Penobscot Indian Island Reservation Facts for Kids. Kiddle Encyclopedia.