Thomaston (formerly known as Fort St. Georges, Fort Wharf, Lincoln) is a town in Knox County, Maine, United States. The population was 2,739 at the 2020 census. Noted for its antique architecture, Thomaston is an old port popular with tourists. The town was named after Major General John Thomas.

As early as 1630, a trading post was established on the eastern bank of the St. George River, then considered the boundary between New England and New France. In 1704, Thomas LeFebvre from Quebec bought a large tract of land along the Weskeag River on which he built a gristmill, with a house on the shoreline at what is now South Thomaston. The area became known as Thomas' Town. In 1719–1720, the old trading post was remodeled into Fort St. George, a stockaded fort protected by two blockhouses. But Abenaki Indian tribes protested the encroachment of an English fort on their territory. Instigated by the French, they attacked the garrison twice during Dummer's War in 1722, then again in 1723 with a siege lasting 30 days. In response to this and other provocations, soldiers destroyed the Abenaki stronghold of Norridgewock in 1724.

During the French and Indian War, in retaliation for the fall of Louisbourg, on August 13, 1758 French officer Boishebert left Miramichi, New Brunswick with 400 soldiers for Fort St George (Thomaston, Maine). His detachment reached there on September 9 but was caught in an ambush and had to withdraw. This was Boishébert's last Acadian expedition. They then went on to raid Friendship, Maine, where people were killed and others taken prisoner. Hostilities of the French and Indian Wars ceased with the 1759 Fall of Quebec.

Mason Wheaton was the first permanent settler in 1763. Located at the heart of the Waldo Patent, Thomaston was incorporated from St. Georges Plantation on March 20, 1777. Many settlers arrived following the Revolutionary War in 1783. General Henry Knox built his mansion, Montpelier, at Thomaston in 1793–1794.

The town prospered in the early 19th century as a port and ship building center. Around 1840, two of seven recorded millionaires in the United States were Thomaston sea captains. Other industries included two gristmills, two sawmills and planing mills, three sail lofts, brickyards, cask manufacturing and a marble works. Lime had been manufactured here since 1734 in kilns. Thomaston is still home to Jeff's Marine, Inc. and Lyman Morse Boatbuilding, builders of custom power and sailing yachts. Located on the St. George River, Lyman Morse Boatbuilding sits on a site where wooden schooners have been built for over 200 years.

Rockland and South Thomaston were set off and incorporated in 1848. The Knox and Lincoln Railroad passed through the town, carrying freight and tourists.

Thomaston was home to the state prison until 2002, when it moved to Warren and the former facility was demolished. The prison was locally famous for its shop featuring handmade wares of the prisoners. The gift shop still exists today. The prison site had been sold to the state in 1824 by former governor William King. Today, Thomaston is a resort area with a large historic district containing Federal, Greek Revival and Italianate architecture. The town was a filming location for the 1996 movie, Thinner.

The Thomaston Historic District is listed on the National Register of Historic Places.

The town is crossed by U. S. Route 1 and Maine State Route 131. It is bordered by the towns of Rockland to the northeast, South Thomaston to the south, Cushing to the southwest, and Warren to the northwest. 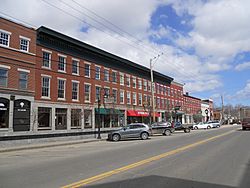 A view of downtown Thomaston, Maine as seen in March 2013.

There were 1,219 households, of which 28.6% had children under the age of 18 living with them, 45.6% were married couples living together, 13.4% had a female householder with no husband present, 3.9% had a male householder with no wife present, and 37.1% were non-families. 30.4% of all households were made up of individuals, and 14% had someone living alone who was 65 years of age or older. The average household size was 2.25 and the average family size was 2.73. 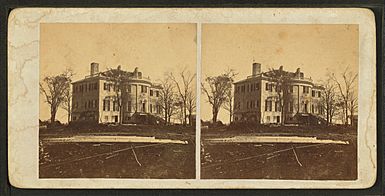 All content from Kiddle encyclopedia articles (including the article images and facts) can be freely used under Attribution-ShareAlike license, unless stated otherwise. Cite this article:
Thomaston, Maine Facts for Kids. Kiddle Encyclopedia.