Rockland is a city in Knox County, Maine, in the United States. As of the 2020 census, the city population was 6,936. It is the county seat of Knox County. The city is a popular tourist destination. It is a departure point for the Maine State Ferry Service to the islands of Penobscot Bay: Vinalhaven, North Haven and Matinicus.

Abenaki Indians called it Catawamteak, meaning "great landing place." In 1767, John Lermond and his two brothers from Warren built a camp to produce oak staves and pine lumber. Thereafter known as Lermond's Cove, it was first settled about 1769. When in 1777 Thomaston was incorporated, Lermond's Cove became a district called Shore village. On July 28, 1848, it was set off as the town of East Thomaston. Renamed Rockland in 1850, it was chartered as a city in 1854. 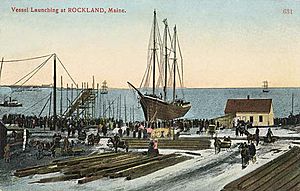 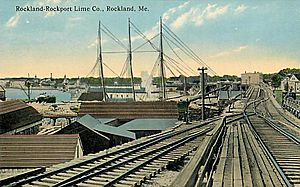 Rockland developed rapidly because of shipbuilding and lime production. In 1854 alone, the city built eleven ships, three barks, six brigs and four schooners. The city had twelve lime quarries and 125 lime kilns, with upwards of 300 vessels to transport the mineral to various ports in the country.

The opening of the Knox and Lincoln Railroad in 1871 brought an influx of tourists. Inns and hotels were established to accommodate them, with the grandest being The Bay Point Hotel in 1889. With a commanding view near the breakwater, the resort offered every luxury and amusement. Renamed The Samoset Hotel in 1902, it was successful until the Great Depression, which began a slow decline. In the age of automobiles, travelers were no longer restricted to the limits of train service, but were free to explore elsewhere. Closed in 1969, the Victorian hotel burned in 1972. A new Samoset Resort opened in 1974.

In 1915, the new superdreadnought USS Nevada (BB-36) conducted tests and completed her running trials just off the shore from Rockland.

Today, Rockland is an officially designated micropolitan area. Since the early 1990s, Rockland has seen a shift in its economy away from the fishery and toward a service center city. It has also seen a substantial increase in tourism and the downtown has transformed into one of unique shops, boutiques, fine dining and art galleries. Rockland is the commercial center of the midcoast Maine region, with many historic inns, a coffee roaster, a food co-op, a community radio station WRFR-LP, and the Farnsworth Art Museum. Rockland was named a Coast Guard City in March 2008, in recognition of the long-standing and special relationship that the city and its residents have with the United States Coast Guard.

Rockland is home to the Maine Lobster Festival, a celebration held annually in honor of the town's primary export: lobster. In the first week of August, thousands of people come from all over the world to participate in this five-day event. Rockland also is home to the Farnsworth Art Museum, a world-famous art gallery containing paintings by Andrew Wyeth and other well-known New England artists. Rockland's main street also features numerous small shops and businesses including coffee shops, book stores, art supply stores, restaurants, organic markets, computer repair and toy stores. Penobscot Bay, which Rockland borders, is known internationally as one of the best recreational sailing grounds in the world. The city's breakwater, built in the 19th century, also draws tourists. Also the Maine Eastern Railroad is based in Rockland and offers limited seasonal passenger train excursions starting in Brunswick, running to Rockland and back. 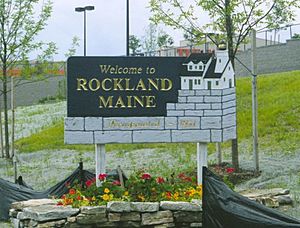 According to the United States Census Bureau, the city has a total area of 15.07 square miles (39.03 km2), of which 12.84 square miles (33.26 km2) is land and 2.23 square miles (5.78 km2) is water. Rockland is located on Penobscot Bay and the Gulf of Maine, part of the Atlantic Ocean. About ten miles to the east are the islands of North Haven and Vinalhaven, reached by ferry from Rockland.

Rockland is crossed by U.S. 1 and 1A, and state routes 17, 73 and 90. It borders the towns of Owls Head to the southeast, Thomaston to the southwest, Warren to the northwest, and Rockport to the northeast. 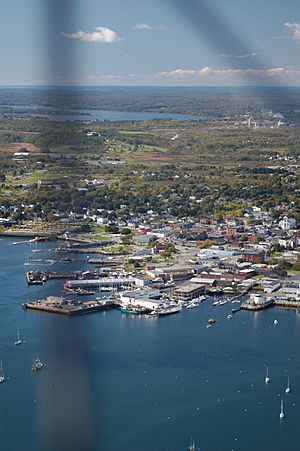 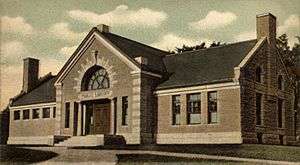 The Maine State Ferry Service operates three ferry routes out of Rockland Ferry Terminal. There are multiple departures per day to Vinalhaven and North Haven, while ferries to Matinicus depart less regularly. Intercity buses operated by Concord Coach Lines also stop at the ferry terminal, with service to Boston, Portland, Brunswick, Bangor, and other nearby towns.

Until 1958, the Rockland was the terminus for Maine Central Railroad passenger trains from Portland, along the Rockland Branch from Brunswick. The Maine Central Railroad ran three trains a day on the days besides Sunday and fewer trains on Sunday. In Portland's Union Station, these trains made connections to trains to Boston, New York City, Bangor and the Canadian Maritimes. In the final months, service diminished to one daily except Sunday trip in each direction, until finally discontinuing on April 4, 1959.

From 2003 to 2015, the Maine Eastern Railroad offered seasonal excursion service to Rockland, Maine which connected to Amtrak's Downeaster at Brunswick. In October 2017, the Northern New England Passenger Rail Authority announced plans to extend one weekend Downeaster round trip to Rockland between Memorial Day and Labor Day beginning in 2018. Intermediate stops would be made at Bath, Wiscasset, and Newcastle. As part of preparation, Amtrak, along with the Northern New England Passenger Rail Authority, Maine Department of Transportation and the Central Maine and & Quebec Railroad, made a test run of a train on August 14. 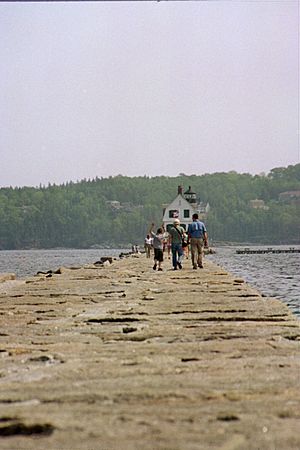 Rockland Breakwater Light, from the base of the breakwater

All content from Kiddle encyclopedia articles (including the article images and facts) can be freely used under Attribution-ShareAlike license, unless stated otherwise. Cite this article:
Rockland, Maine Facts for Kids. Kiddle Encyclopedia.