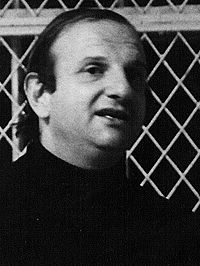 Robert "Bo" Goldman (born September 10, 1932) is an American writer, Broadway playwright and screenwriter. He has received two Academy Awards out of three nominations. He was born in New York City. He is known for writing the screenplay of One Flew Over the Cuckoo's Nest. For his work on the movie Goldman also received the Writers Guild Award and the Golden Globe Award.

All content from Kiddle encyclopedia articles (including the article images and facts) can be freely used under Attribution-ShareAlike license, unless stated otherwise. Cite this article:
Bo Goldman Facts for Kids. Kiddle Encyclopedia.