Matinicus Isle is an island plantation in Knox County, Maine, United States. The island is located within Penobscot Bay about 20 miles east of the mainland coast and is accessible by ferry from Rockland or by air taxi from Knox County Regional Airport. The plantation is both a year-round island community and a summer colony. The population was 74 at the 2010 census.

Matinicus is an Abenaki word meaning “far out island.”

The island was probably long used by the indigenous people of North America as a place for hunting and gathering, and Europeans probably started visiting the island in the 16th century. Early documentation of the island comes from John Josselyn‘s 1671 account of New England:

Sagadehock to Nova Scotia is called the Duke of York’s Province. Here Pemaquid, Matinicus, Monhegan, Cape Anawhagen…are all filled with dwelling houses and stages for fisherman, and have plenty of cattle, arable lands and marshes.

The island is also mentioned in the May 1717 deposition of two sailors whose trading ship was commandeered off of Cape Cod by pirates from the ship Whydah. They testified that they were forced to sail north with the pirates, who then took a launch “to Matinicus, where they took a sloop belonging to Colonel [Stephen] Minot, one shallop belonging to Captain [John] Lane and three schooners.” In March 1726, Lieutenant Governor Dummer of the Massachusetts Bay Colony documented the early tension between the Native Americans and Europeans in a letter to Captain John Giles:

I very much resent this liberty [the Native Americans at Matinicus] have taken in killing the [livestock] which belong to the English, which is contrary to the Articles of Peace and that common justice which the English and Indians owe to one another.

In 1750, Ebenezer Hall became the island's first permanent settler. Accompanied by his family, he built a house, commenced fishing and farming, and claimed territorial rights to the island. He burned the grass on nearby Green Island to produce hay for his livestock, infuriating the Penobscot tribe, who still used the islands for fishing and sealing. Twice the tribe wrote letters to Royal authorities in Boston, complaining about Hall. In the second, delivered for forwarding on April 25, 1753, to Fort Richmond, they warned, "if you don't remove him in two months, we shall be obliged to do it ourselves." Though Hall was ordered to leave Matinicus, he continued his residence there, and the Penobscots waited not two months but a little over four years before taking action. After a multiple day siege on his house, they killed Hall on June 10, 1757.

In the following decades several families, including that of Ebenezer Hall's son, moved to the island, and at the census of 1790 there was a total population of 59. The population continued to grow, and on October 22, 1840, the island was formally organized as a plantation. 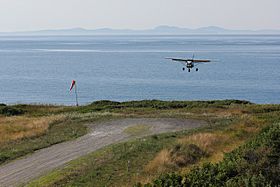 As a maritime community, the residents of Matinicus have long worked as sailors and fisherman. The early days of fishing for cod, mackerel, and herring gradually gave way to lobster fishing, which continues as the dominant industry on the island today. The importance of this industry to the livelihood of island residents has led to territorial disputes. In July 2009, an island fisherman shot and wounded a fellow fisherman in a dispute over the locations of individual lobster-fishing rights.

The plantation has one church, the Congregational Church of Matinicus, which was built in 1906 and currently holds Sunday services during the summer months and serves as a general community function hall. The island is a routine stop for the Maine Seacoast Mission's vessel the Sunbeam, which offers pastoral care as well as nursing and telemedicine facilities.

The island's inhabitants have served as first responders to emergencies in the waters of Penobscot Bay. On January 16, 1992, residents of Matinicus responded to a distress call from the O.A. Harkness, a nearby sinking tugboat, ultimately rescuing the three crew members. On July 17, 2011, island fisherman rescued 4 occupants of an airplane that ditched into the waters off of Matinicus.

Panorama of the harbor in 2006 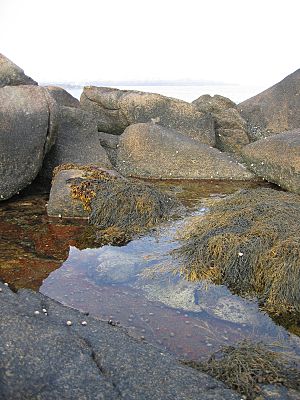 Matinicus Isle plantation is an archipelago located on the southeastern fringes of Penobscot Bay in the Gulf of Maine, part of the Atlantic Ocean. According to the United States Census Bureau, the plantation has a total area of 9.9 square miles (26 km2), of which 2.3 square miles (6.0 km2) is land and 7.6 square miles (20 km2) is water. Matinicus Island, the largest land mass in the archipelago, spans approximately 2 miles (3.2 km) in length and 1-mile (1.6 km) in width for an area of about 720 acres (290 ha). The elevation ranges from 0 to 100 feet (30.5 m).

The shoreline consists of rocky coves and sandy beaches. The island experiences semidiurnal tides with a difference in sea level of up to 10–11 feet (3.0–3.4 m) between high and low tides.

There are ten major fishing grounds around Matinicus Isle that the island's fishermen use to catch cod, haddock, pollock, cusk, and lobster.

Matinicus has a humid continental climate (Köppen climate classification Dfb) with warm, humid summers and cold winters. Compared to the mainland, seasonal climate fluctuations are somewhat moderated by the Atlantic Ocean, resulting in relatively cooler summers and milder winters. Nor'easters, such as the Blizzard of 1978, can be destructive to the shoreline and infrastructure on the island.

There were 147 housing units at an average density of 63.9 per square mile (24.5/km²). 41 homes were occupied, and 99 homes were for seasonal, recreational, or occasional use.

All content from Kiddle encyclopedia articles (including the article images and facts) can be freely used under Attribution-ShareAlike license, unless stated otherwise. Cite this article:
Matinicus Isle, Maine Facts for Kids. Kiddle Encyclopedia.